by Alice Butler and Daniel Fitzpatrick 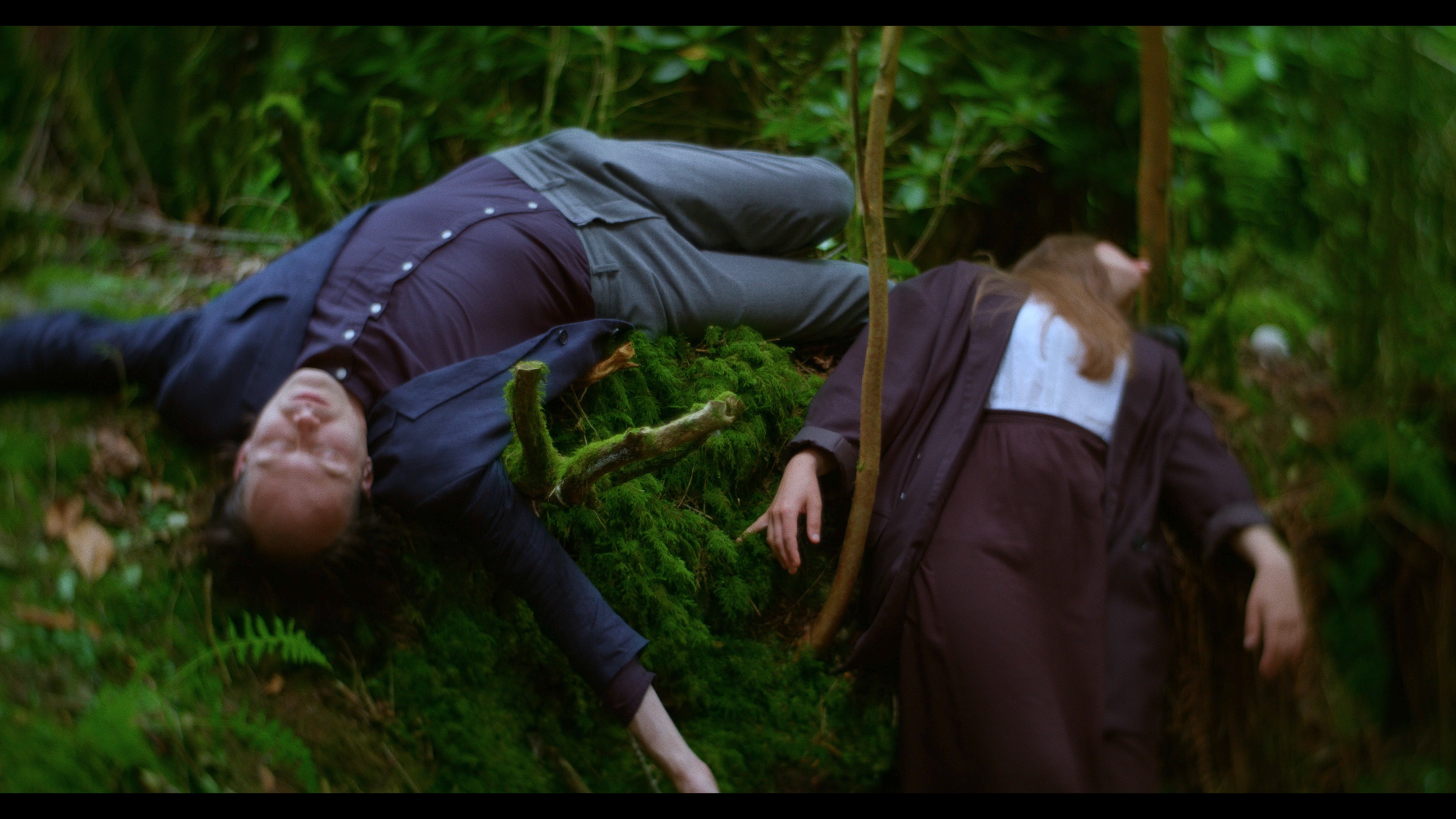 Rouzbeh Rashidi’s otherwise wordless Phantom Islands begins with a quote from Sheridan Le Fanu’s The Tenants of Malory, a novel published in 1867 about a long-abandoned house that is unexpectedly occupied by residents whose arrival triggers a series of strange and macabre episodes. Best known for his work in horror fiction, Le Fanu serves as an instructive introduction to Rashidi as a filmmaker who, like the Irish Gothic writer, is attracted to the mysterious aspects of human and animal behaviour and deeply invested in evoking this in as meticulously crafted and original a manner possible.

As with The Tenants of Malory, Rashidi’s film is concerned with what we might perceive as ‘new arrivals’; a man and a woman who never leave each other’s side, appearing mostly alone together on an island where they may as well be trapped. They are seen surveying the island’s edges, perhaps looking for a means of escape or awaiting news from an outside, unreachable elsewhere. Without much in the way of human company or comfort, the presence of the animals on the island looms large. Horses, seagulls and sheep at times assume an air of menace which is pronounced by a stark, exquisite soundscape variously comprising violin strings, house alarms, barking dogs and raging lightning storms. This is offset by more tender images of a foal feeding from her mother, an image which illustrates the idea of physical dependency of one body on another. The human couple is, for the most part, in bizarre sympathy with each other – a feature best expressed in their manner of sleeping in increasingly absurd positions next to one another – but in fits and bursts, a demonic panic arises and the man is struck by episodes or seizures of anguish and distress which his partner is unable to restrain.

These turbulent scenes and others recall Hour of the Wolf (1968), one of Ingmar Bergman’s lesser known works featuring Max von Sydow and Liv Ullmann as Johan and Alma, a married couple who retire to an island seeking respite after Johan suffers a crisis of untold description. Like Hour of the Wolf, which opens with the sounds of Bergman giving direction about the framing of a particular shot, Phantom Islands makes room for its crew on screen – including Rashidi himself – appearing briefly and irregularly to apply makeup, converse cheerily with the cast over cups of tea and provide direction in between takes. Unlike Bergman’s chilling tale of insomnia-driven despair however, which is marked by extended monologues and close, intense exchange, Phantom Islands returns to the unadorned power of early speechless cinema. We see Rashidi’s couple speaking in hushed tones or roaring at each other in brutal conflict but the source of their agony is never elucidated for us. The film is strengthened by two committed, deeply expressionistic performances from Daniel Fawcett and Clara Pais, experimental filmmakers in their own right who have been working together since 2012 on projects which draw upon dreams and visions and which they describe as ‘created from a belief that cinema is still young and that there are many dimensions to this medium that are yet to be explored.’ Similarly, Rashidi is eager to make those rarely considered cinematic possibilities legible and Phantom Islands conveys his adept skill in adopting this task.

In some of Phantom Islands’ most striking scenes, the couple explores an aquarium populated by tropical fish and other sea creatures. In contrast to the wide expanses of the film’s island shots, this marine world appears alien; the fish confined and uneasy in a way that resembles the couple’s precarious position as the subjects of this or any film. In this way Rashidi expertly draws a comparison between the preserved life forms contained behind transparent walls and the position of the human figure projected on screen. By doing this he asks us to think about what it is to look and be looked at and how the act of filmmaking invariably involves a degree of capture and control. 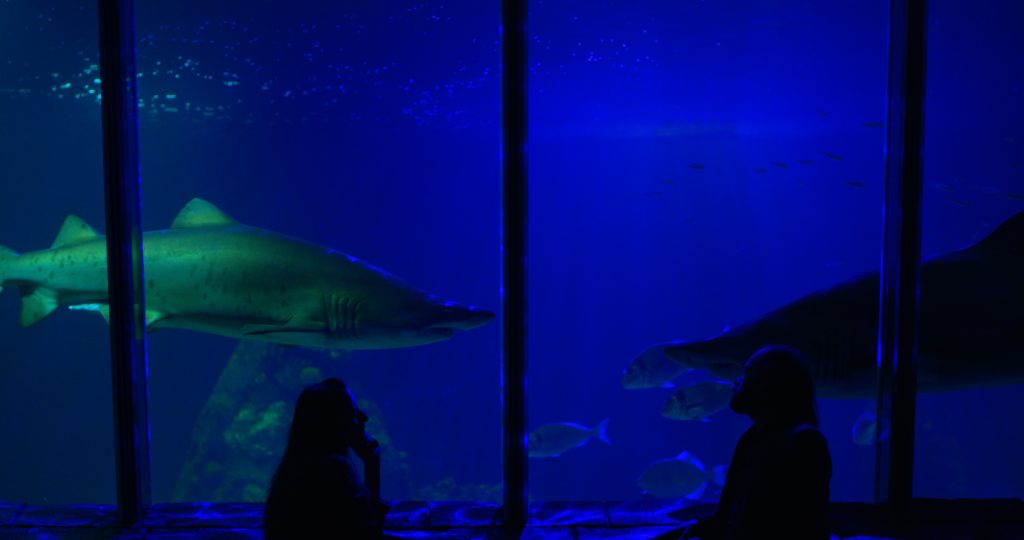 Rouzbeh Rashidi’s latest film ‘Phantom Islands’ opens with images of a dark and stormy night. The irreality of these early scenes evokes the hand-tinted processes of early cinema, those encountered for example in a series of films inspired by the pioneering dancer and choreographer Loie Fuller. Those early films employed painstaking frame by frame processes to mechanically reproduce effects of projected light on silk and other materials used by Fuller in her performances. There are also aspects of dance and choreography in Rashidi’s film but the processes used here, while no less intricate, are created digitally rather than by analogue processes. These processes are used here to choreograph a thunderstorm, the flashes and hues of purple, red, yellow and blue that appear in Rashidi’s images of a night sky let us know early on that any claims to a ‘documentary’ style realism will likely be complex and contradictory. Phantom Islands from the outset will aim to do more than merely ‘show things as they really are’.

This is of course one of many narratives that begin with a storm, with most of those belonging to, or at least flirting with, the genre of gothic horror. The filmmakers associated with the Experimental Film Society have always been refreshingly comfortable with the trappings and markers of genre cinema and Rashidi’s film includes various forms of possession, a suggestion of vampirism, blood rituals, and lupine behaviours. Where for the most part those horrors that begin with a storm, even later full colour advances like Dario Argento’s Suspiria, quickly take us indoors, frequently to some or other kind of haunted house, Rashidi’s film for the most part takes place outdoors and is all the better for it as once familiar images of the film’s Irish rural setting take on otherworldly qualities as the interior  landscapes of the film’s central couple begin to meld with, to affect, and in turn be affected by, an otherwise largely uninhabited rural idyll.

The film represents an entirely new endeavour for Rashidi. In writing about the filmmaker’s earlier works I recall noting that all of his films seemed to connote or contain aspects of science fiction, with Phantom Islands however this no longer seems to be the case. Rashidi has uncovered rich new potential here, incorporating elements of documentary practice that were not so heavily present in his earlier works. The film focuses heavily on what I assume to be a real-life couple (Daniel Fawcett and Clara Pais of ‘The Underground Film Studio’) but there should be little confusion here that these actors are performing a role and that this is also a fiction. Where Rashidi’s earlier films evoked a very useful sense of ‘no-place-really’ the setting for Phantom Islands is more explicitly recognisable, focusing on the islands around Ireland at what would seem to be high summer. These images are made somewhat unreal here by a visual distortion not entirely dissimilar to that used by Alexsandr Sokurov for his 1997 film Mother and Son, another close to wordless masterpiece. Where Mother and Son seemed to always take place either at dusk or dawn however the majority of Phantom Islands occurs in the cold light of day.

Phantom Islands is then very much the story of a relationship, a relationship presented with a great deal of intimacy. In that intimacy we will find tenderness (Clara Pais) and aggression/torment (Daniel Fawcett) but there is also a striking moment late in the film when the character played by Fawcett will be replaced by Pais. There is a point in the film, during a moment of rare quietude for the character, where we see Fawcett standing alone in what appears to be a garden. He will later be replaced in that same setting by Pais, who appears now covered in blood. This veil of blood is revealed as artifice in one of several scenes which collapses the diegesis by revealing its construction but a question remains as to whether this is the blood of her partner. There is certainly some sense of release in these moments even as the couple will be reunited at the film’s close but there is also a moment earlier in the film when we saw time, reflected in the movement of water, stop momentarily and reverse its trajectory and this complicates the film’s timeline so ambiguities remain as to the final composition of the central relationship.

Ultimately Phantom Islands is a way for Rashidi to explore some of the tensions that continue to play out between documentary and fiction. In its real-world setting the film also contains aspects of Michael Powell’s The Edge of the World, another pioneering pseudo-documentary text that also took place on an island that felt haunted by some spectral presence or other. In the end Rashidi is less interested in what distinguishes one form from another but in opening himself up to a new mode of enquiry he has successfully liberated his own practice and opened up a rich new vein of exploration.