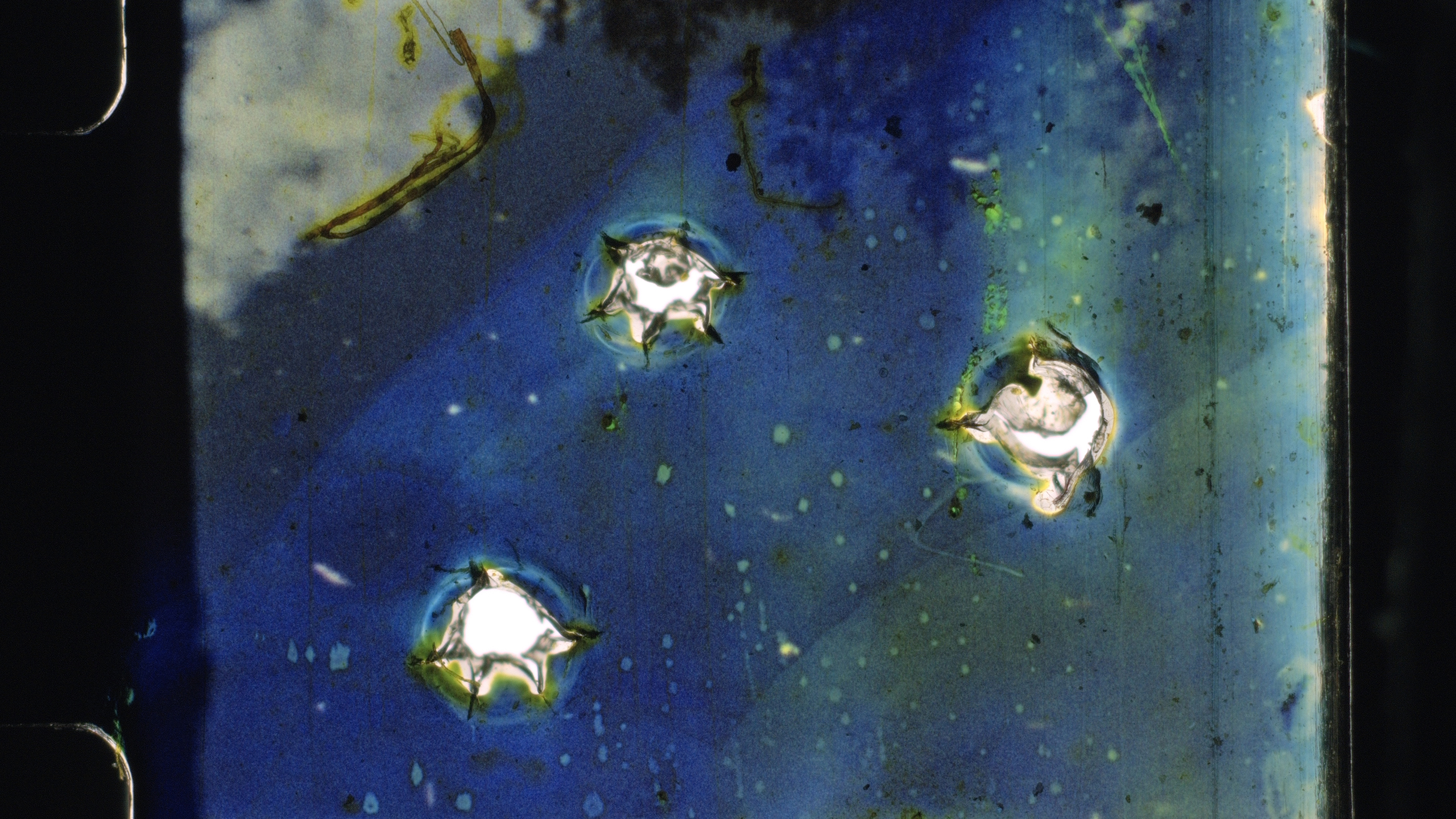 Iranian-born, Dublin-based visual and performing artist Atoosa Pour Hosseini could be called ‘a memory weaver’ of the Experimental Film Society. The ‘memories’ which she gently weaves into dreamlike, crystalline existence are as fragile and volatile as one might assume, yet they possess the undeniable quality of timelessness, whether they are ‘captured’ on 8mm tape or by a digital camera. Diving into the indefinite space formed out of their inner or rather, intrinsic luminosity gives the viewer a liberating sense of omnipotent illusion, and of being one with the vast otherness.

Pour Hosseini’s earliest cinematic efforts are closely-knit to her background in fine arts, so her first two works are entirely composed of still hand-drawings into a ‘handicapped animation’ of sorts (think Belladonna of Sadness or ‘ga-nime’ by Toei studio). Test (which is unavailable online, apart from the illustrative screencap on the author’s official webpage) is an homage to the quintessential piece of German Expressionism The Cabinet of Dr. Caligari. The other one called Then (2011) seems to be a natural continuation of the 2008 project Your Soft Whispers which acts as the meeting point of hypnagogic and apocalyptic visions. Densely atmospheric, it looks as if it were derived from the torn pages of a lost picture book that once belonged to some ancient tribe endowed with prophetic gifts. Replete with misty landscapes and lonely, alienated (human?) figures, it evokes the simplicity of primordial art and simultaneously plunges you into the furthest depths of the Unknown, all within a mere five minutes. As the burbling of water gets gradually overtaken by the howling of wind, the succession of bleak images dissolving into each other ‘speaks’ for the long-bygone past.

The water – a recurring motif in Pour Hosseini’s oeuvre – is the centerpiece of a haiku-like film, Reflected (2011), where a recognizable urban silhouette (the row of houses) is mirrored on the river surface, creating the life-size simulacrum of our own world turned upside down, like in a dream or in a fantasy. A black screen that mimics the blink of an eye marks the ‘break’ between two realities, the second of which is more real and depicts a two-oar sculling practice, with the rowers (and a few bird overseers) shot from a perception-changing distance.

In the following miniature, Silences (2011), the vespertine urban vista bathed in oversaturated tones of pink turns quite menacing and forms a claustrophobic prison for a little girl in what appears to be a nightmarish reminiscence of the author’s childhood. The sweet face of the sleepy (not to mention vulnerable) protagonist becomes the canvas for the vivid interplay of timid light and dominating shadows – the symbol of fears. Safety-belted to the backseat of (presumably) her parents’ car, she is taken someplace new and yet, the city doesn’t let her escape, which is emphasized by the closing frame circling back to the beginning and wrapping the ‘narrative’ in the cloud of inevitability.

Veering towards pure abstraction, despite the occasional intrusions of clearly definable objects, is Dimensions (2013) – a genre-and-description-defying part of the Recollections project that explores the correlation of drawings, paintings, moving images and sounds. Created through the utilization of various projection techniques revealed in the synopsis, it betrays some of Pour Hosseini’s major influences. In a virtual James Turrell-esque space, the video is restricted to the mid-screen section not unlike that of Rouzbeh Rashidi’s Indwell Extinction of Hawks in Remoteness, and drenched in azure light that recalls the ‘flicker films’ of Paul Sharits, whereby the indistinguishable geometric shapes channel Agnes Martin’s ‘discretion on inward-ness and silence’.

Also made in 2013, Luminosity (1) and (2) are both steps forward in their creator’s artistic evolution, as well as the logical progression of ideas regarding time and space (or more specifically, location), memory and (self)reflection presented in the preceding offerings. The former – beautifully lensed in black and white – sees a woman (Pour Hosseini herself) wandering around the ruins amidst the woods, in a series of oneiric, mildly disorienting superimpositions set to the enigmatic dialogue of gurgling water and complete silence. A semi-transparent black rectangle serves as a focal point in this contemplative, melancholy-ridden, even metaphysical experiment. Via the complex layering of static and moving images containing, respectively, a colorful aurora-like display and gloomy urban winterscapes, Luminosity (2) introduces a ‘cosmic’ dimension to the artist’s ever-growing study. Its tenacious quietude increases the viewer’s bewilderment.

Opposing it with bursts of unsettling noise is Incubus (2013) – a fiery, half-remembered nightmare that could easily be renamed into ‘Atoosa in the Radiant Labyrinth’. Though only a minute and a half in length, it is quite unforgettable by virtue of extremely saturated reds, oranges and yellows of the sleeping heroine’s subconscious dungeon. As hot as the titular demon’s lust, it almost provokes thirst which is quenched by Last Phase (2014) – befittingly, the last film of the DSLR phase. Once again, Pour Hosseini embraces the poetry of water and using minimalist means, portrays the tension between the conflicting states of emerging and being submerged, to paraphrase her words. From that liminal condition, a new horizon rises.

With Clandestine (2015) which was partly filmed in Estonia, the auteur switches to Super 8 format, discovering plentiful possibilities of celluloid and striving for whatever lies ‘beyond the truth’, as the Serbian art historian and filmmaker Đorđe Kadijević (of The She-Butterfly fame) puts it. For the first time, she merges the found footage with her own, giving birth to the universe founded upon the twisted inner logic that allows the past, present and future to exist side by side, at least by way of (decaying) memories. The three worlds – Then, Now and Tomorrow (or Forever?) – collide with each other, disappear and reappear throughout the lyrical (non)narrative, constantly disrupted by external factor – the ‘divine intervention’.

In a (relaxed) home video turned (intense) piece of art, Oasis (2015), under ‘the alien scrutiny of the artificial eye’, four figures take pleasure in the picnic at the lake (or river?), swimming and eating strawberries. However, their shared idyllic getaway is interrupted by she who holds the camera and has a full control over the recorded material in the editing room. By deliberately freezing the enjoyment of her subjects for brief moments, she implies that the ‘memento’ you see is fabricated and therefore, even more plastic and susceptible to changes than the one produced by our mind. Maybe the oasis is nothing but a mirage?

And Mirage (2015) takes you to a desert, as the filmstrip surface invades the filmed scenery and vice versa, to the piercing rhythm that simultaneously dispels and solidifies the illusion of cinema. Covered with grainy patina, a couple lost in the middle of nowhere looks for the exit from the tricky clash of two closely related, yet mutually counteracting visual planes, but the ending of the film itself does not let them find it. They remain incarcerated by the strong, vibrating textures. It should not go without mentioning that the opulence of very textures is one of the main reasons to delve into the Super 8 phase of Pour Hosseini’s filmography.

Gleanings (2017), for instance, takes the mark-making on the tape to the next level, pulling you into the extremely texturized realm that once belonged to an unidentifiable spectator whose home videos – involving children and soldiers – are now given a whole new meaning. Filtered through the vivid, trembling abstract patterns caused by scratches and whatnot, his/her reminiscences are transformed into a glitchy, ambiguous spectacle laced with symbolism, and the everyday of the unspecified past is filled with uncanniness.

Further blurring the boundaries between the palpable and imaginary / personal and universal / filmic and our own reality / conscious and subconscious / found and original footage / true and fabricated memories / inner and outer ‘places’ to the point of completely erasing them is Refining the Senses (2017) whose title suggests the real purpose of the artist’s mission. This charming, self-reflexive phantasmagoria employs the archetypal imagery (often tangled in elaborate superimpositions) and haunting soundscapes to lull you into a dream shared with the character of (the modern-day) Briar Rose, if the woman spinning wool on a spindle is any indication. Draped in sepia tones and tints of blue, it is both redolent of old times and progressive in its revitalization of historical avant-garde.

A bit more of the self-referentiality and fairy tale elements are present in Pour Hosseini’s latest (and this writer’s personal favorite) work Antler (2018 with the sound composed by Karen Power) which could be dubbed ‘a biological/ecological fantasy’ that is part poetic fiction, part pseudo-documentary along the lines of Rashidi’s Phantom Islands. Shot in National Botanic Garden of Ireland, it boasts an abundance of wildlife (insects, lizards and deer, with a drowsy owl thrown in) and comes off as the most stupefying amongst the Super 8 delights. The hardest one to decipher (even when accompanied by the director herself) is the girl with a mirror (Julia Gelezova), but there is something witchy about her and it must be those hypnotizing rays of reflected light… Regardless of (or rather, thanks to) its impenetrability, Antler brims with arcane magic, so personally, I am burning with anticipation to see what this memory weaver will spin next.