The Improvisational Cinema of Rashidi and Devereaux 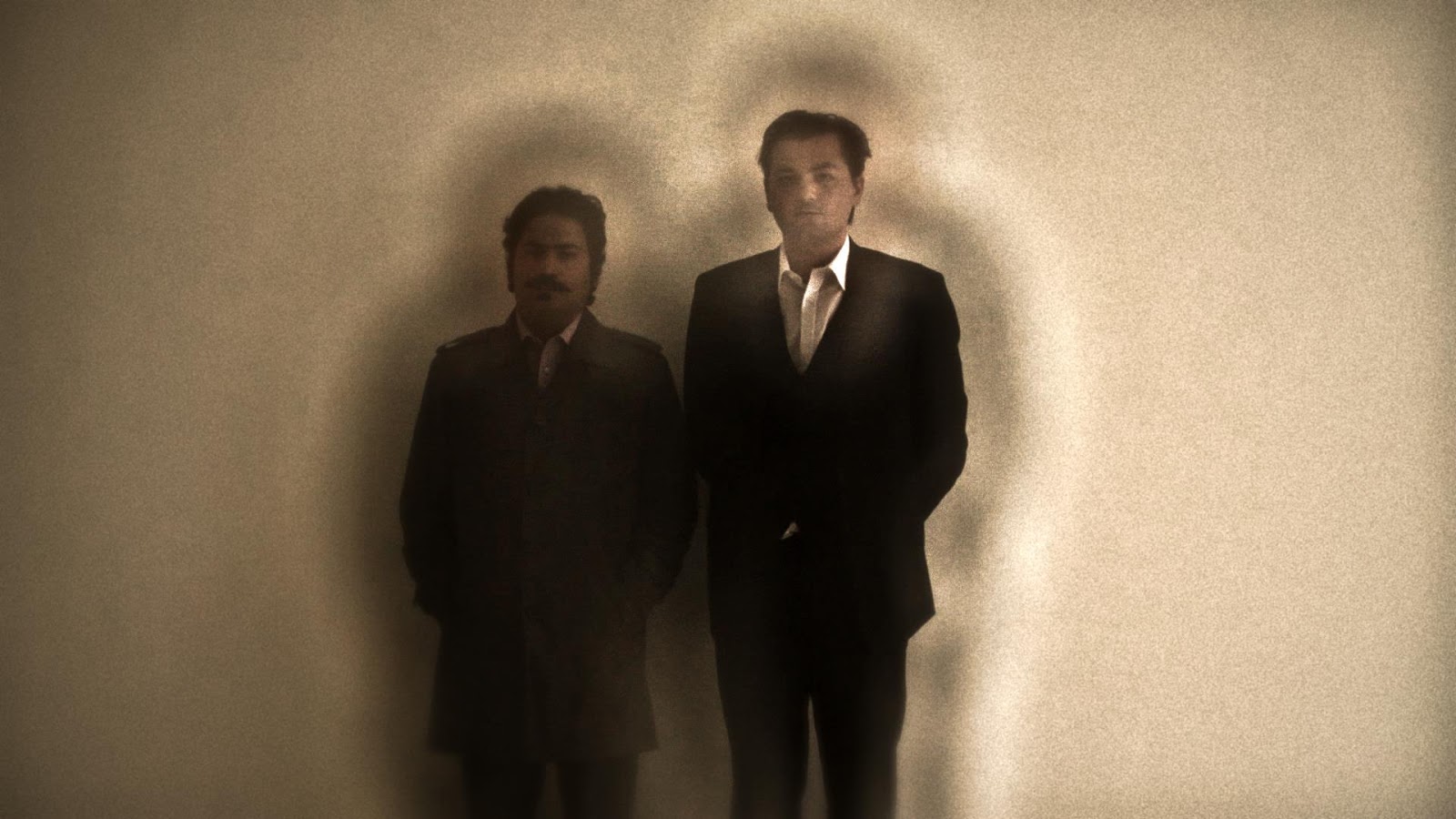 Their first offering Closure of Catharsis (2011) puts on display both of the aforementioned artists’ enviable improvisational skills which will become even more apparent with each subsequent effort. Inspired by Jesse Richards’s Remodernist Film Manifesto, it opens and closes with Devereaux’s unnamed character sitting in a park, chewing on a bubble-gum, observing the passers-by whom he addresses as his “guests” and reflecting on various themes, from Vodafone ads, through B&W telly and all the way to the Yorkshire Terriers. According to the basic instructions given by Rashidi, he “tries to remember something he has repressed because of its traumatic impact upon him”, so his (ostensibly nonchalant) struggle with blurred memories can be viewed as a “faux mystery” or some such. An ode to the absurdity of life, perhaps.

What at first appears as a severe cinematic test of patience, considering our hero’s seven minutes long silence, gradually transforms into an intimate soliloquy or rather, into a one-sided colloquy with the viewer posing as the attentive listener. A stranger who we know absolutely nothing about obtains the features of a very close friend, by virtue of James’s naturalness, spontaneity, immediacy, imagination and liberties allowed by Rashidi. (Not to mention a generous dosage of healthy irony.) Through a gaping hole in the fourth wall, (his?) reality and (our?) fiction merge into one immersive whole and it is a marvelous experience – we get acquainted with the protagonist and would gladly shake his hand or buy him a beer.

The lack of action in a traditional, mainstream sense of the word is compensated by the vividness of our new mate J’s stream of consciousness narration which veers into comedic territory from time to time (if you allow it) and is supported by a wide range of micro-expressions. And when his truly honest face fills the entire frame during the finale, we are glad it turned out that way, because then, he gets a well-deserved closure suggested by the title. But, what about all of the distractions, like those “jittery” intermissions of grainy quality and ambiguous meanings? How do they relate to J’s reminiscences and his confession of the biggest fear? Do they belong to his subconscious mind or are they nothing more than surrealistic red herrings?

Well, Rashidi’s Hitchcockian cameos and “prop deliveries” will hardly help you find the answers. Neither the chirping of the birds and the murmur of busy traffic, the stark monochrome aesthetics and the scent of melancholy in the air will let you easily solve the puzzle or determine if there were a puzzle to begin with. However, there’s no denying that the film provides a unique journey through the world simultaneously humane and outré.

The “soul travelogue” goes on in Boredom of the Disgust & Monotony of the Tediousness (2012) which marks the second interplay between Rashidi and Devereaux. Here, the latter is given more space to apply his methods of “Actions, Tools and Super-objectives” in overcoming the challenges set by the mischievous director. Paradoxically, his “playground” is much smaller and, at first glance, less inspiring. He is confined to an almost empty room of blank white walls where he is supposed to play several characters in addition to expounding his own theories on acting and compiling a list of favorite actors and actresses to defend his theses. So, through the peculiar, minimalist mélange of documentary essay and monodrama sketches (for lack of better phrases), he “prints” his own calling card and it is quite impressive.

One scene – a more elaborate version of George Kuchar’s I, an Actress (1977) – sees him having a squabble with an imaginary person whom he’s trying to take to an important party. This invisible interlocutor resists, so James is forced to utilize various tactics (Tools), from persuasion to mockery, in order to achieve his goal (Super-objective) and thereby he performs an Action. There’s a catch, though – all the while, light flashes as in Lynchian nightmare and/or white noise from a radio blasts at him persistently. These distractions, as deliberate as the jocular title, don’t seem to affect him or his self-examination through constant transformation, but they do, to a certain extent, make difficult for the viewer, especially a non-native English speaker, to focus on his (echoing) words.

They completely cease in the second to last vignette when Mr. Devereaux digs into the role of an ecstatic and a little bit snobbish film critic who owns a cinema theater at his home and loves to brag about the prominent auteurs. Following this droll parody is a metaphorical farewell to his onscreen alter-egos – a beautiful outdoor shot of him visiting a private graveyard, accompanied by a soothing piece of classical music. The illusion of his and Rashidi’s making is not dispelled there, but instead, it is strengthened and relocated to their third collaborative project.

He (2012) – an insightful and harrowing portrait of a suicidal man – juxtaposes the lead character’s revealing monologue (evoking the one by Laura Dern in Inland Empire) with the equivocal imagery of dreamlike quality, similarly to Closure of Catharsis. Initially, the man (whom we’ll simply call D. hereinafter) records a message for his estranged wife, touching upon her “complacency and grating personality”, as well as upon different aspects of their relationship. A young couple who comes into play just before D. starts the tirade against his apathetic mother and cowardly father clearly shows the previously discussed neglect of marital duties. Their appearance adds a new layer of reality to the fictional creation, given that another actor poses as D.

Speaking of fictional creations, Devereaux works with no script once again, demonstrating great talent for extemporization and delivering the powerful, unaffected performance, both physical and verbal. In the total absence of music, his languorously paced oration defines the film’s hypnotic rhythm, whereby the enigmatic, frequently blurred, carefully interwoven sequences of D. wandering around the vacuous, dilapidated buildings operate as the abstractions of D’s troubled mind or rather, as the externalization of his repressed feelings of anger, sadness and disappointment.

As the narrator, he is draped in deep shadows of noirish, austere B&W compositions (except for the parents chapter) which underscore his emotional detachment and later, in the duologue with Cillian Roche as D’s best friend, his steel determination to end his life and the closeness of the eternal abyss. On the other hand, the sepia-tinged colors of “mental intrusions” and the warm, orange tones of what could be interpreted as D. envisioning his last minutes reflect the superiority of the vivid subconscious world.

Through the rapid intercutting between the chiaroscuro “disclosure” and the polychromatic “flights of fancy”, Rashidi successfully conveys his protagonist’s inner struggle and makes us understand the despair that D. endures. Also praiseworthy is the way he uses the brooding soundscapes (kudos to Mick O’Shea and Emil Nerstrand) to accentuate  the key moments in the suicidal ideation. With He, a psychoanalyst would have a field day…

… which also applies to HSP: There Is No Escape from the Terrors of the Mind (2013) – the most impenetrable and wildly experimental film of the bunch. As the title informs us, it could be viewed as a spiritual and more sinister successor to He. A haunting exploration of the darkest recesses of human psyche, it introduces an apparently upset John Doe (James Devereaux, at home away from home) who’s maybe a poet, according to the official synopsis, but probably isn’t and who battles his own demons or some otherworldly entities pulling him to the edge of sanity and eventually pushing him over it. Lost in the unfamiliar landscapes, he embarks on a quest, oblivious of its purpose.

When we first meet him, after the creepy mask prologue and a few seemingly incoherent shots of a neon-lit City Cinema, rotating ceiling fan and sea of clouds, he saunters down the pathway through a cemetery towards the camera, to the sounds of melancholic violins and weeping bowed saw. The admirers of Jean Rollin to whom HSP (standing for Homo Sapiens Project) is dedicated will surely recognize Philippe D’Aram’s composition from Fascination (1979) which Rashidi borrows for this very scene.

Next thing we know, the guy sits on a park bench (maybe the same one from Closure of Catharsis) and he’s shown from two angles, in split screen. His “right self” (or left, if we take his perspective) spouts a reverberating monologue about hating someone, whereby his “left (self-possessed) self” discovers the aforementioned mask – a visual leitmotif – lying next to him and puts it on, setting in motion a series of bizarre “events” linked by “glitchy” passages. Only ten minutes have passed, but we already find ourselves scratching our heads, desperately trying to figure out what’s happening.

At least two men and one woman who are, presumably, the embodiments of John Doe’s convoluted personality roam at different indoor and outdoor locations, such as a beach, tunnel, desert, corridor, forest, hotel room and ruins amongst the palm trees, which represent the regions of the protagonist’s mental or astral plane. On the other hand, it is quite possible that those mysterious personas and their surroundings belong to some sort of elusive über-reality which is beyond our ken.

Infused with layers upon layers of ambiguity (think Maya Deren meets David Lynch at his oddest meets Nina Menkes), HSP provides plenty of oneiric visuals drenched in foreboding drones and enhanced by the brazen filters à la Shūji Terayama, with each color signifying a mood swing… or not. Whether it conveys a dizzying nightmare or descent into madness, its star and its creator both emerge triumphant.

The modest celebration of their achievements comes in the form of Mutual Admiration Society (2014) – their third film that is entirely B&W and the only one with designed intro and outro credits. Its fragmented, non-linear, dialogue-free story is told in exquisitely photographed tableaux vivants which are effectively complemented by a distant noise, ambient sounds, persistent clock ticking or dramatic instrumentals by the German and Soviet composer Alfred Schnittke.

Each take is literally framed in white, with the image format varying from scene to scene and James Devereaux’s tormented (and of course, nameless) character being the focus of our attention. Who is he? What are his motives and background? Why does he hold his head and drag his foot as if he were hurt? None of these questions is given a clear answer, because his “game” has no written set of rules, which doesn’t stop the playful thesp from giving another inspired solo-performance.

“Trapped” in what appears to be an absurd deconstruction of a crime flick by way of the French or Czech New Wave and postmodern installation art, he assumes the role of a petty gangster and acts him out with authority. This time, his “Action” is reduced to the overture and the aftermath of the (anti)hero’s (mis)deeds – for example, we see him repeatedly sneaking up on an unidentified (non-existent?) enemy with a gun, as well as hiding or trying to run away from someone, haunted by guilt. This might sound like an oxymoron, but his and Rashidi’s charade is laced with honesty and distinct charm.

A concise retrospective of their collaboration is presented in their latest opus Conditions (2014) – a lyrical documentary which blends the rearranged takes and outtakes from the previous films with some fresh footage and intentionally muted behind-the-scenes chitchat. As far as the remixed stuff is concerned, the most prevalent are the (decontextualized) excerpts from He, so the viewer is likely to assume that the artist duo considers it to be the pinnacle of their combined efforts.

Rashidi’s camera captures Devereaux waiting, frowning, ruminating, smashing stuff, walking down the street, watching through a window, sitting in an almost empty cinema theater, sipping coffee in a crowded restaurant, looking for something in the rain or, in a nutshell, being fetishized. Virtually every shot is the reminder of James’s subtle expressiveness and significance of his contribution, but also the confirmation of Rouzbeh’s assured direction and one strong, unconditional friendship.