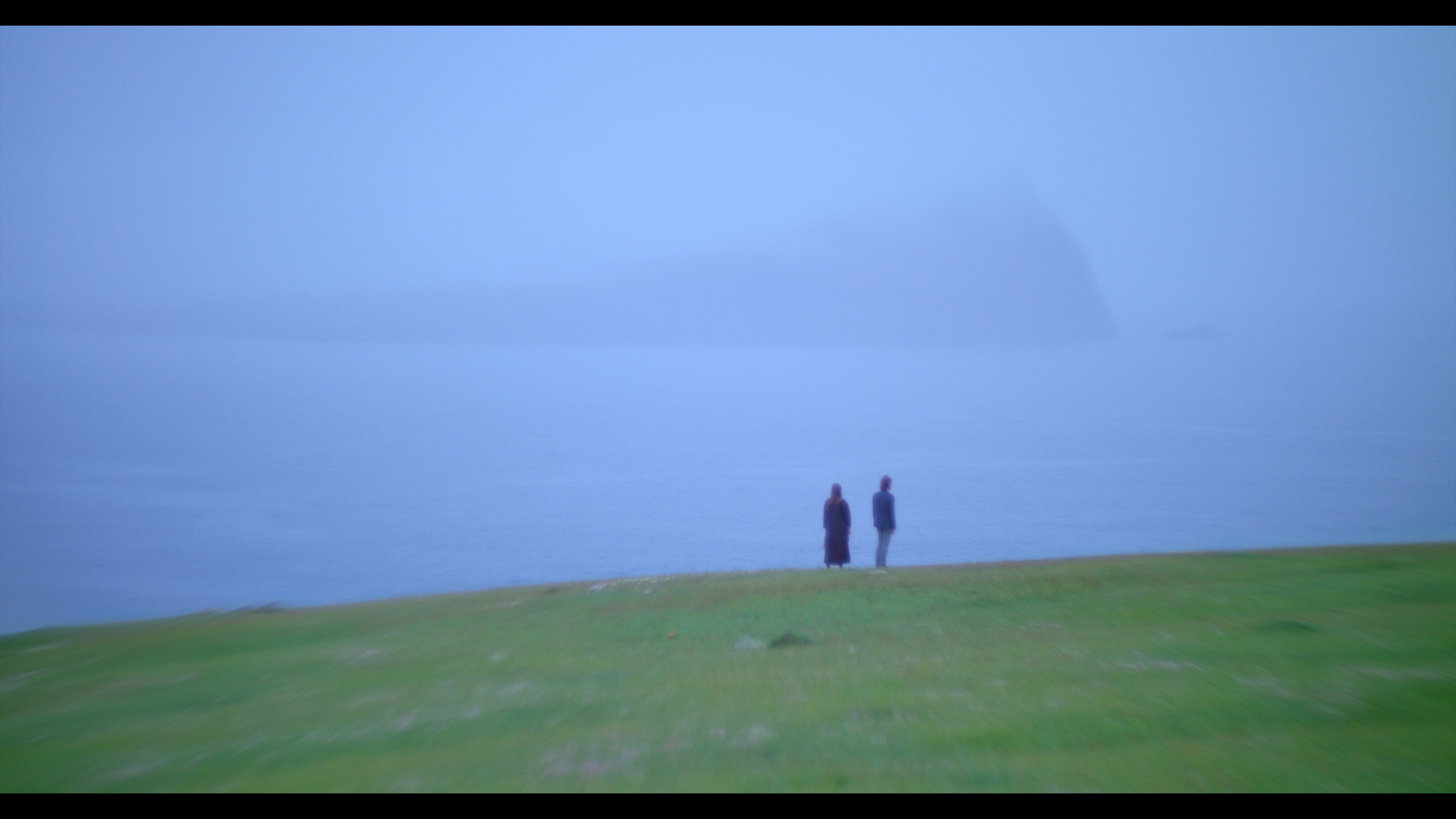 Phantom Islands (Ireland, 2018, 86’) is the overturning of the neo-pagan occultist Jörg Lanz von Liebenfels paradigm, in which anthropognosis is at the beginning of the search for God. Rouzbeh Rashidi moves from the principle that nature exists, that nature comes no matter what, to manifest itself and to give itself; the nature explored by the founder of the Experimental Film Society, is understood as such, “sive substantia”. Therefore, not as a set of φύσει όντα, but as the atmosphere on behalf of which what it is, to ὄν, can be by remaining in itself. In this sense, the distinction between φύσει όντα and τέχνῃ όντα is irrelevant or in anyway secondary – and it does not interest Rashidi: the moored boat is no less natural than the storm that ignites the night, disturbing it. Indeed, the question of its being natural or not, which is artificial, should not even arise, since what it is, it is, by being landscape; the boat is already a pier, there is no image of a boat that does not allude to the sea, or a flower in the absence of its lawn. The islands that Rashidi shoots are therefore not the context of the story, but the very occurrence of what happens in them and because of them: the islands are like the eventing of what happens, the background that, asymptotically, one depicts so that something comes into being – and exists in the intimate retreating of the island.

What it shown in Phantom Islands is above all the island, as an atmosphere that inflates events, and it is clear from here that there is a certain desire to break (with) classical narration. For classical narration, the environment is a boundary, the context of the story, τόπος where something happens. In Phantom Islands, to paraphrase a philosopher who apparently it is no longer very prudent to cite, this τόπος is the ποῦ, a bit like – so to speak – as for the physiologists of Ancient Greece: it is no longer a place where a certain thing happens, but the very occurrence of that something which comes into being because it happens, and it happens because it is determined to be by the being of the ποῦ – of where and place – in which it happens. The τόπος is therefore at the same time the being of what happens, and the happening of what it is; the atmosphere where the events and the bodies, drawing pencils of these same events, are concentrated, and are almost pneumatically processed by the events. As will be clear later, the event does not have to be a body but, as we may anticipate, it is more frequent that the event manifests itself with violence, with an act of radical otherness than a body, which can only at this point embody the event itself. And this is basically what happens to the two protagonists, of whom nothing else could be said, apart from them enduring the insular atmosphere.

Overturning, as we said at the beginning, the paradigm of the ex-Cistercian monk, Rashidi moves to the discovery of the bodies of two vagrants, starting from the nature of the islands, “sive substantia”. But how can we grasp a singularity without confusing it with the whole in which it is included? By grafting fiction into the documentary. The bodies of the fishermen, for example, are in the nature of the islands. The nature of the islands, in the sense that we said above, implies both the sea and the boats, the rocks as well as the bodies of the fishermen: all this – and more – is what we define “atmosphere”, which insists and subsists and is, therefore, filmed documentarily. The documentary filming, however, cannot be such if not opposing itself to something that identifies it as such: there is no documentary that does not have elements of fiction. Rather, fiction is necessary in the documentary in order to allow one to look at the natural element, the atmosphere, in its appearance. So, Rashidi starts from the documentary, from the atmosphere, to get to the bodies of the two vagrants. These two vagrants – as we will see shortly – are the actual characters that finally allow Rashidi to retain a documentary image, a shoot of insular atmosphere. Now, we have seen that the bodies have to embody an event, which happens with violence and is unrelated with respect to the bodies. The event is the unknown, the radical otherness, the white horse, or the islander who, interacting with the two vagrants, is extraneous from the island, just enough to bring out the vagrants’ foreignness from the insular atmosphere and, at the same time, from themselves as a couple (the couple almost shatters at this point). This definines their very essence, starting from the other, from itself, from what it is not and of which, nevertheless, it needs to be (such). For there to be an event, it is therefore necessary that there is something with respect to which strangeness is given: this something is the bodies of the vagrants, actors.

The two vagrants have to endure the insular atmosphere to such an extent that Rashidi’s entire feature film shows nothing but the continuous acts of violence through which the event is embodied in the vagrants’ bodies. The shattered acting aims precisely at this – as above – to revolve to a fiction that finally allows itself to be discarded; discarding from the documentary and thus returning to a documentary image – the atmosphere of the island – as the remainder of the whole process. It is interesting, in this regard, to notice how this happens, that is, how the fiction lights up the documentary, how this atmosphere is returned so haphazardly and is apparently obstinate to be held back by the camera; how these two bodies act retrospectively to an animality that, in fact, predisposes them to be welcomed by the islands. As we have seen, the two bodies embody the event, but embodying the event does not mean taking possession of an otherness, but rather being expropriated of a property. The ego is thus cracked: the body finds itself harbouring an otherness that it is not able to manoeuvre; indeed, on the contrary, it confuses its most intimate property. Particular attention must be paid to this moment, since the violence of the event does not lie in the fact that, suddenly, the body hosts a stranger. Rather, the violence of the event is such when the event is embodied, and the body is no longer able to distinguish its own self from the stranger, the identity from the otherness. There is therefore a certain predisposition of the body to embody the event, although this predisposition is only latent. What activates it? The image. In different scenes, the vagrants photograph nature, that is, they try to extricate themselves from the atmosphere to materialize it in an image. The result of it is the phantom. The shots, rather than reproducing shadows, return phantoms, a particular type of being maximally fused with the atmosphere. The photographic image is thus the means of a passage of strengths, of intensity between the body and the atmosphere, between the fiction and the documentary. In fact, these phantoms, far from being anthropomorphic, outline the hidden intensities of the island: intensities that the vagrants cannot yet grasp.

Phantom Islands thus could be defined as a metacinematographic work to the extent that its reflection is decisive in itself, not for itself: cinema does not refer to anything other than itself. It is a fiction, yes, but it is a documented fiction, a documentary that continuously documents the fiction it produces. Documentary of a fiction, Phantom Islands reverses the paradigm of Jörg Lanz von Liebenfels, but, in overturning it, it exposes itself – and can only be otherwise: nature manifests itself to digital codes only, and only if the digital matrix appears – and appears as natural. The two vagrants sacrifice themselves to the islands, and their sacrifice is worth it as it brings out the natural side, the atmosphere one breathes, which defines the islands as such. At the same time, cinema acts on reality by altering it, and it is this alteration that legitimizes the status of the cinematographic image: the cinematographic image no longer only seeks to capture the real but to be real itself, and cannot reach this without opposing the real with the unreal, the documentary with fiction, nature with technique.

An aquarium pretending to be able to represent the sea, a window in the ocean to be able to evade the gaze from the depths of the sea, without making it shake or even startle … Rashidi conceives the cinema as τέχνη, but an τέχνη which is defined as such by itself: and this contrasts with something we could call φύσις. It is the fiction that illuminates the documentary side of Rashidi’s work, the cinema that, as technique or (the same) art, places itself as other with respect to something that is being named because of this contrast. Nature does not exist because of the cinema, but for it. The cinema stands as τέχνη (technique or art if you prefer) in order to be able to capture something that would otherwise be confused, namely the φύσις. To do this, however, it is necessary for the cinema to present itself as such (see the black shots that from time to time that interrupt the sequences and refer to a shutter click, to the black between a frame and the other, which allows the scrolling of the frames and their visibility as temporal sequences), so that it is possible to fix, materialize something that is pure force, disruptive power. The φύσις is fake, but this fiction is finally returnable, is found at the height of the cinema. «Φύσις κρύπτεσθαι φιλεῖ», and cinema hunts it out: but what remains, of it, then, when it is no longer its own concealment? It is the cinematographic image, ashes of the fire of the φύσις, ashes that “take [their] place by making room, to let it be understood: nothing will have taken place except the place”. A place that is not empty but emptiness itself.