The Man and Woman Who Fell to Earth 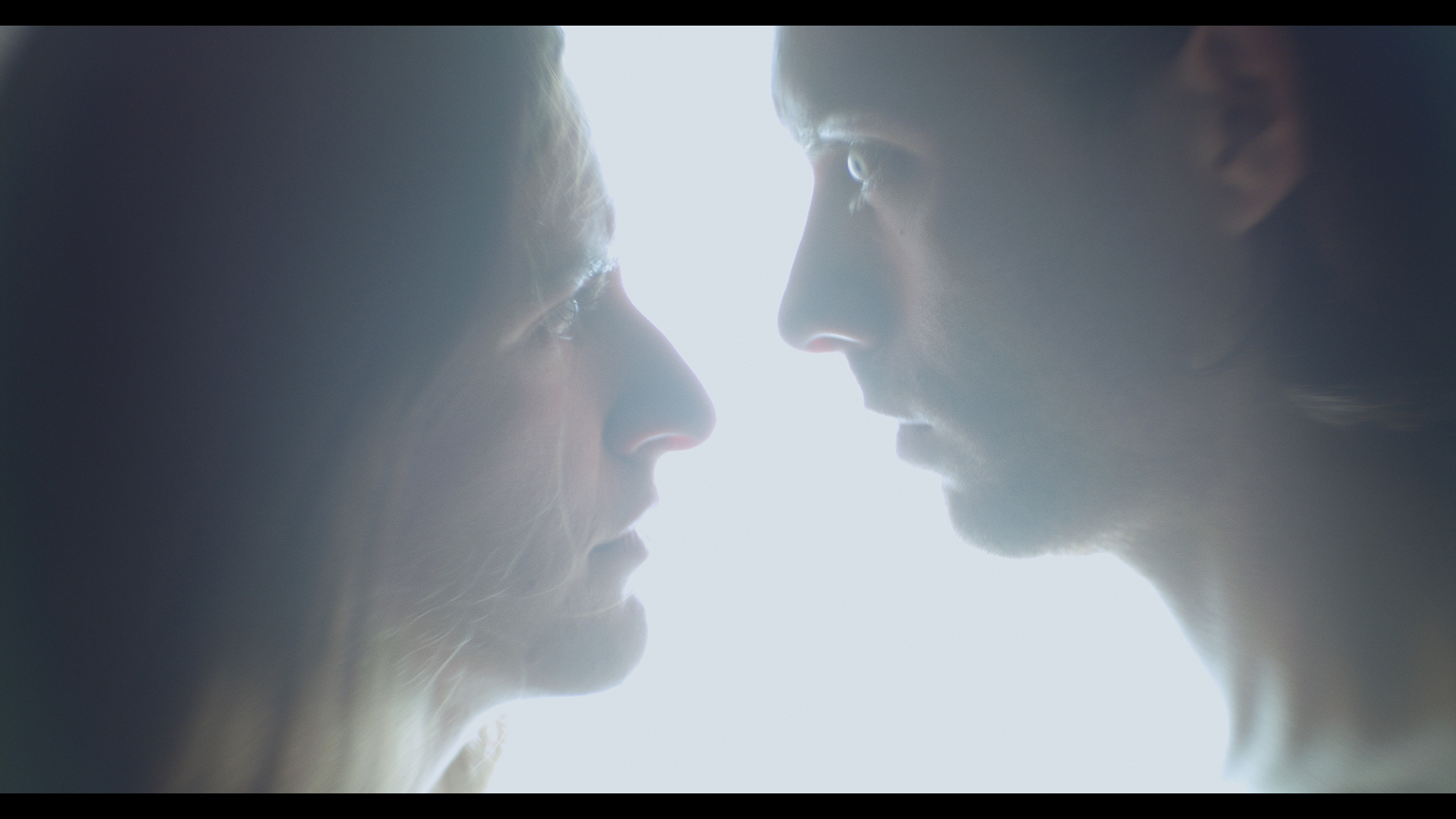 Somewhere a phantom island
Can be reached in phantom ships.
– April in Paris (1952)

One island or many? It is easy to become geographically lost while watching Rouzbeh Rashidi’s Phantom Islands (2018). There are glimpses provided of the film’s own fabrication – make-up blood poured over a body, a couple of crew members trundling about – but nothing that can ever anchor us very clearly in a specific place or time. And this lack of co-ordinates remains in force even when – insistently – the performers (legendary filmmaker duo Clara Pais and Daniel Fawcett) turn and look directly into the primal lens to show the slowly coagulating colours, forms and shapes appearing on a Polaroid print taken straight from their own camera. Who or what is off-screen here, who or what is being beseeched to witness, to validate a picture? Not simply the film’s credited, all-too-human author, but also some other kind of agency or force, mysterious, cosmic, unsettling.

Phantom Islands proposes, for its viewers, a hypnagogic delirium. Hypnagogia (I first learned this word reading about Alfred Hitchcock’s films!) is all about the state of “threshold consciousness” between waking and sleeping, sleeping and waking. Things become blurred and indefinite, while still retaining some concreteness, some solidity, some reality. The hypnagogic state is virtually a definition, or a theory, of cinema itself.

For Rashidi, the hypnagogic ideal relates to the way that even the most intractable piece of “local colour” documentary reality (such as the older man studied in an early shot of Phantom Islands), if looked at long and hard enough, if kept on screen a bit longer than normally expected, starts to devolve and dissolve into weirdness and self-consciousness.

The colours are saturated, excessively intense (what did Félix Guattari once say? “There are colour elements, of blue, that are really agonising throughout”); the edges of things are blurred, curving. The digital cinematography by Rashidi, and the further colour grading work by Michael Higgins, are extraordinary. To be out-of-focus, here, is as natural as being in-focus; white objects or creatures (seagulls or lighthouses, for instance), in particular, blaze in all their dazzling, painterly whiteness when abstracted and blurred in this way. Zones of clarity and obscurity shift and trade places within a single shot.

Rashidi calls it, in the opening credits, a “pictorial film”. Meaning that the images are foregrounded as the essential material – yet the sounds, too, in their extraordinary design (Rashidi collaborated with Amanda Ferry, Vicky Langan and Cinema Cyanide on the total sonic ensemble), also make pictures, incessantly, within, across and against the purely visual matter. It is our entire sensorium that is up for grabs here.

Phantom Islands has a hallucinatory feel – like an LSD trip. Rashidi has long channelled his love, in his work, for the past psychedelia of film, music and design from the 1960s and beyond. Horror, sci-fi, fantasy: a heritage both corny and sublime, all at once. But, this time around, Rashidi dials down the intensity of movie allusion and pastiche. The context is different: in place of a hall-of-mirrors of trash and high art, sophisticated cinephilia and childlike rapture, here we start from another space – a space of nature. This space is neither unspoilt nor uncivilised: the acculturated elaborations of the aquarium, the zoo, the artificial display case, return time and again. The sounds, too, make that connection: all the little clicks and cracks of a needle on a vinyl album turntable mingle and meld with birdsong, rustling grass, the patter of waves on a shoreline …

This admixture of the natural and the cultural, the raw and the cooked, raises a pertinent question: what, exactly, is an island? Philosophers, artists, novelists have been drawn for centuries to the task labelled, with false modesty, “description of an island”. Something more than geography beckons to us here; something greater and more mythic is at stake.

The critic-filmmaker-teacher Alain Bergala, for example, has spent a lifetime writing about islands in cinema, and their special appeal to certain filmmakers. In an important sense, making a movie on an island is an intensification of what all (or most) project-based filmmaking entails: getting a disparate team of people (cast and crew) together and keeping them in one spot for a more-or-less predetermined amount of time – and if the hoped-for magic doesn’t happen there and then, if it is not caught on celluloid or tape or in a digital file, the chance to get it may never come again.

An island is, in every sense, a paradoxical place or space; and it holds a rich set of historic and cultural associations. An island is circumscribed, and yet it seems limitless, free. No longer does the city-grid rule, obscuring the sky and the elements with its constructions. Vision itself is liberated: an island can offer the camera (depending on its degree of human-cultural ‘development’) a 360 degree, unbounded view – blowing away the usual rules and constrictions over cinematographic ‘coverage’. Vestiges of culture, too, seem removed, blown away; like the desert, an island can be a place of self-forgetting, of historic oblivion.

An island is a site for escapes and holidays (the ‘island getaway’); but it is also a hellish trap, offering imprisonment and stagnation (‘Devil’s Island’). It promises renewed enchantment in the face of nature, but also hides the worm of disenchantment, repetition, dull ritual.

Cinema has always been torn between the horns of this island dilemma, toggling between the two extremes. There are the islands of romance, of exoticism, of renewal, of wonder – the ‘belle isles’; and then there are all the in-bred couples and families stuck in their Gothic island dwellings, locked in their duels to the death – the islands of lost souls. Michael Powell, Jean Epstein, Ingmar Bergman, Roberto Rossellini, Clare Peploe: the scattered army of filmmakers drawn, despite innumerable logistical problems, “back to the island” (as the late Leon Russell sang).

Phantom Islands is now playing. Shots pass by, separated by black frames. The rhythm of this movement, and the disturbance it enacts on our vaunted perceptual “persistence of vision”, resembles the blinking of our eyes: either at the dawn of, or trying desperately ward off, the coming of sleep, of unconsciousness … or of death.

The images and the darkness in this mechanical, metronomic rhythm also recall the action of an old-fashioned slide carousel. A special kind of perturbation of the senses is thereby produced: when an image blinks on, it is sometimes hard to tell immediately, without further scrutiny for verification, whether this image is a freeze-frame, or part of an almost perceptible real-time movement (of the water, the wind …). And then it might blink away too quickly to figure any of this out.

I have been holding off, all this time, on conjuring or speculating about a story line, because that’s what Phantom Islands itself does: it holds off on narrative. It would be too easy to say, by way of some imaginary synopsis: a man and a woman appear on an island, in rooms, on rocks, in a forest field, along winding paths. There are gestures of love, and gestures of aggression – an elongated performance-piece, almost a dance-piece, of attraction and repulsion.

That’s already too much plot for what we see and hear here. Rashidi favours the kind of deliberate “unformedness” in art that resembles a spreading stain or paint blotch, rather than an advancing, developing, narrative line. There’s a cluster of motifs, obsessions, locations, gestures, noises: they are given to us all at once, in the beginning, and thereafter shift themselves into different combinations and variations. That’s the “plot”.

But there are recognisable human figures. They are this man and woman, and also all men and women who have ever formed or will ever form a couple; a mythic Everyman and Everywoman. We see them sleeping, or unconscious, or dead, in all the sites of the film, whether interior or exterior; there is no mythic Everychild (like in an early Phlippe Garrel film) to get in the way of their eternal, golden slumber.

Yet this man and woman, as observed, staged and filmed by Rashidi, are sometimes ambiguous as figures, and full advantage is taken of their mutual androgyny when seen from certain angles and in certain lights. They come over a little like aliens, David Bowie clones minted from a faded print of Nicolas Roeg’s The Man Who Fell to Earth. As in an Ingmar Bergman film, their faces, the skin textures, can blur and overlap in our minds, even if they are not literally, nakedly superimposed. The mythic Man and Woman form one indivisible cell – but forever straining against its own oneness, just as the film itself strains against the unity of traditional, feature-length form. Love is strange …

I earlier quoted Félix Guattari (who was talking about Terrence Malick’s Badlands back in 1975, a film that featured the song “Love is Strange”), from an interview-text titled, fittingly, “Cinema Fou”. He evoked a film – the film he saw in his mind, hallucinated from one he saw, fleetingly, on a screen – in these terms (duly montaged by me):

If this were an avant-garde film, it wouldn’t get shown anywhere. The story is only there to support a schizophrenic journey. At every turn, we are on the edge of madness. It is this constant crossing of borders that seems perfectly conveyed to me. The boy and girl make up a kind of double arrangement. It’s absolutely impossible to separate the normal and the pathological. We are shown a love story which is totally beyond stereotypes, a kind of extraordinary schizo love …

Rouzbeh Rashidi, as auteur, may have had none of this in his head, or all of it, it doesn’t matter. Writing about Phantom Islands, bearing witness to it, should not be a matter of explaining or interpreting it in a step-by-step, logical argument; still less, a matter of applying some organising template of “official theory” over the top of it, corralling it within a certified conceptual context. Writing, too, can behave like a spreading stain. For the action of Rashidi’s “cinematograph” is paratactical: a tiny crab-step forward, then slightly back, again and again. Piling up elements and stringing them out without excessive regard for their neat and tidy conjunctions.

Like for the poet Friedrich Hölderlin or the philosopher Theodor Adorno, Phantom Islands, for Rashidi, is a film that aspires to the Sublime and the mytho-poetic: but without the god-like vantage-point of judgement, without the certainty of clear self-to-other or subject-to-object relationships, without “the subordination of particulars under universals” (Sebastian Truskolaski). When the conventions of language (film language included) are so utterly undone and redistributed into a new kind of floating montage, we can come to know (as Adorno suggested) “for the first time what culture would be: received nature”. Received through the lens, through technology, as well as through the eye, the mind, the skin. A “Utopia of cognition”, a “thinking into openness”. Somewhere, a phantom island can be reached in phantom ships.