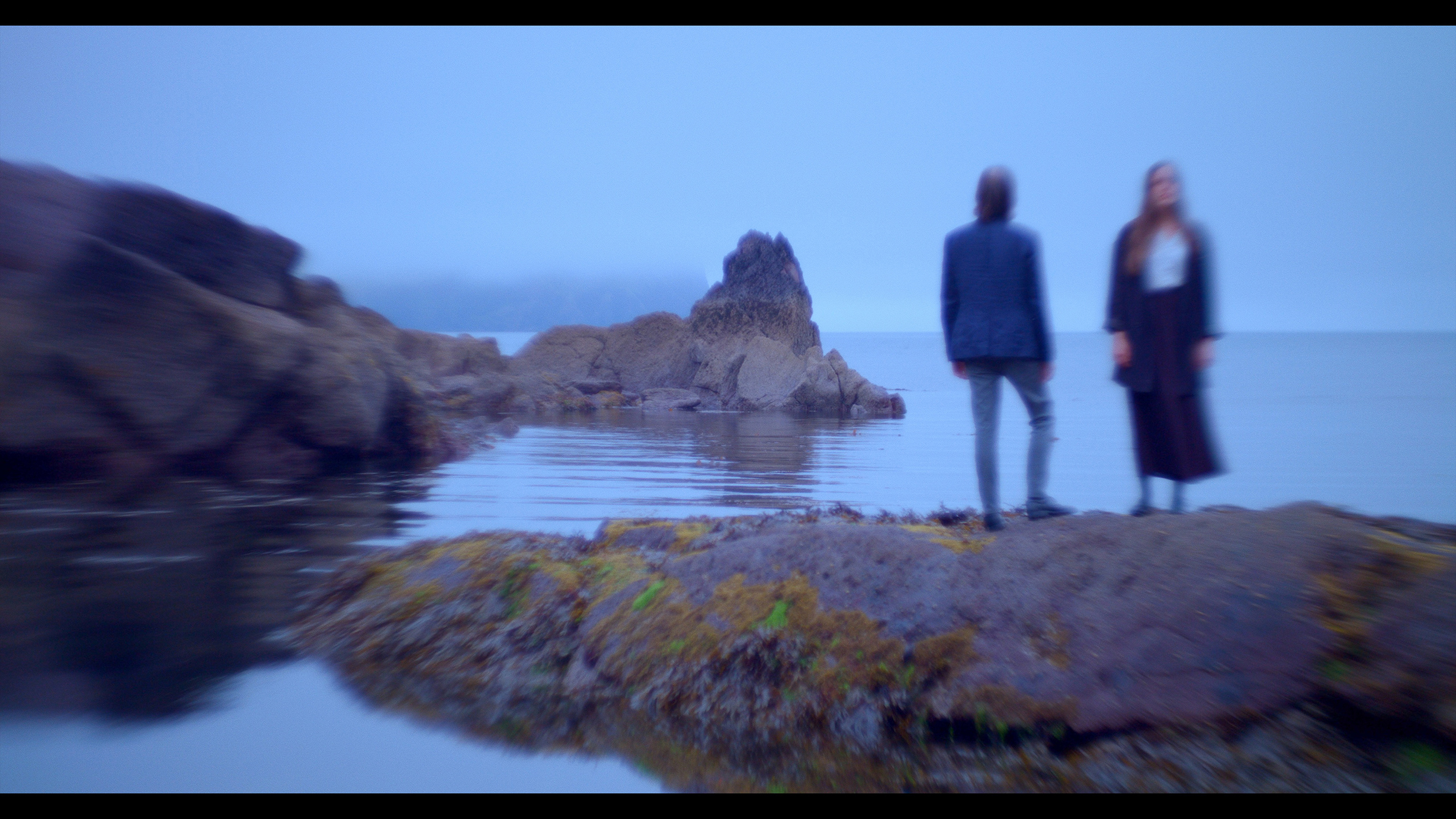 Making Cinema for Rashidi means first of all talking about Cinema, and how it can relate to what we define as real; how, basically, a modern filmmaker can develop certain concepts, by situating himself in the space between a documentary approach and a purely fictional one.

This is what the promotional press-kit introduction says about Rouzbeh Rashidi’s latest work. It is appropriate to consider this film as pictorial. The representative image of the Irish landscape and its islands (portrayed in a continuous blending and dispersion of what emerges and vanishes), already in itself bewitching, acquires further fascination under the original artistic touch of the filmmaker from Tehran. We could define the works of the author as paintings and the structure as that often used in a triptych. Phantom Islands reopens a discussion that seemed closed, after the deliberately final conclusions of Trailers staged apocalypse. But Rashidi makes it immediately clear that the analysis carried out will focus on slightly different issues from the usual ones. In this case, an issue very similar to that of Inside from the EFS Langan-Le Cain duo – psychological instability – is taken into consideration and deepened in relation to what has been said so far. Its causes and developments are viewed using the vehicle of an isolated couple, lost in time and space. Here, however, everything is not reduced to the mere proposing of a circumstance, but instead uses it to project the characters within a well-defined space, a precise setting. This does not hide a certain nostalgia towards the pleasant backgrounds in Jean Epstein’s Cinema, and an even clearer reminder to his Finis Terrae, by trying to understand how much the director’s criteria affect the actual nature of the character itself.

In the writer’s opinion, after reaching the last frames of Phantom Islands, where the eye is lost trying to follow the dispersive wandering of the protagonists (two lovers adrift, pushed into a processing / existential withdrawal probably following a crisis) towards a horizon of which, now, there is no more perception, the mind can easily reference early Philippe Garrel. There is almost a re-formulation, in a modern interpretation of La Cicatrice Intérieure, where, “fighting figures or on the contrary in harmony with each other” * are lost between enchantment and oppression. They are visually sculpted in the centre of a space, whose alteration of the optical frame tends to remove the tangible reality, producing an effect similar to that already experienced by Carlos Reygadas in Post Tenebras Lux. On the one hand, we have the ecstatic austerity of an environment exposed to an iridescence that suspends its deforming geographies between oneiric and ancestral places of “origin”. On the other hand is the overwhelming influence that it exerts on the human being, until it absorbs body and soul, making it its own; complementing it to its own nature. At the same time, however, the importance of gestural language and its melodramatic emphasis (which is at times brought to an extremism of representation) seems clear after a few minutes. This film, just like Garrel’s Le Révélateur, essentially operates on the absence of the spoken word, outlining its own path through structures typical of early Cinema. “The attempt to revert to a language of the origins”, stripped of any dialogue, is punctuated by frequent black screens that emphasise the vision – similar to the effect of a slideshow – and act like a photographic shutter.

The same medium, operated in the hands of the protagonist, seems to try in any way (and circumstance) to imprint in itself an image of that elusive landscape, of the same filmic matter at the moment when the lens turns right towards our gaze. From here, we see the concept which underlines the work described by Rashidi: to reflect on the possibilities of the medium in dealing with that threshold space, often indistinguishable, between documentary and fictional Cinema. But in fact – and ultimately – one could also speak of an image held back as inevitably linked to time (returning to the issue of the origin), and the need to preserve, through the use of the fixed shot, the sculptural plasticity of those bodies adrift: now disoriented and sleepless, now cradled by the suffused conformity of that evanescent landscape, as in a sort of lethargic surrender.

A collaborative article between Cinepaxy and Visione Sospesa