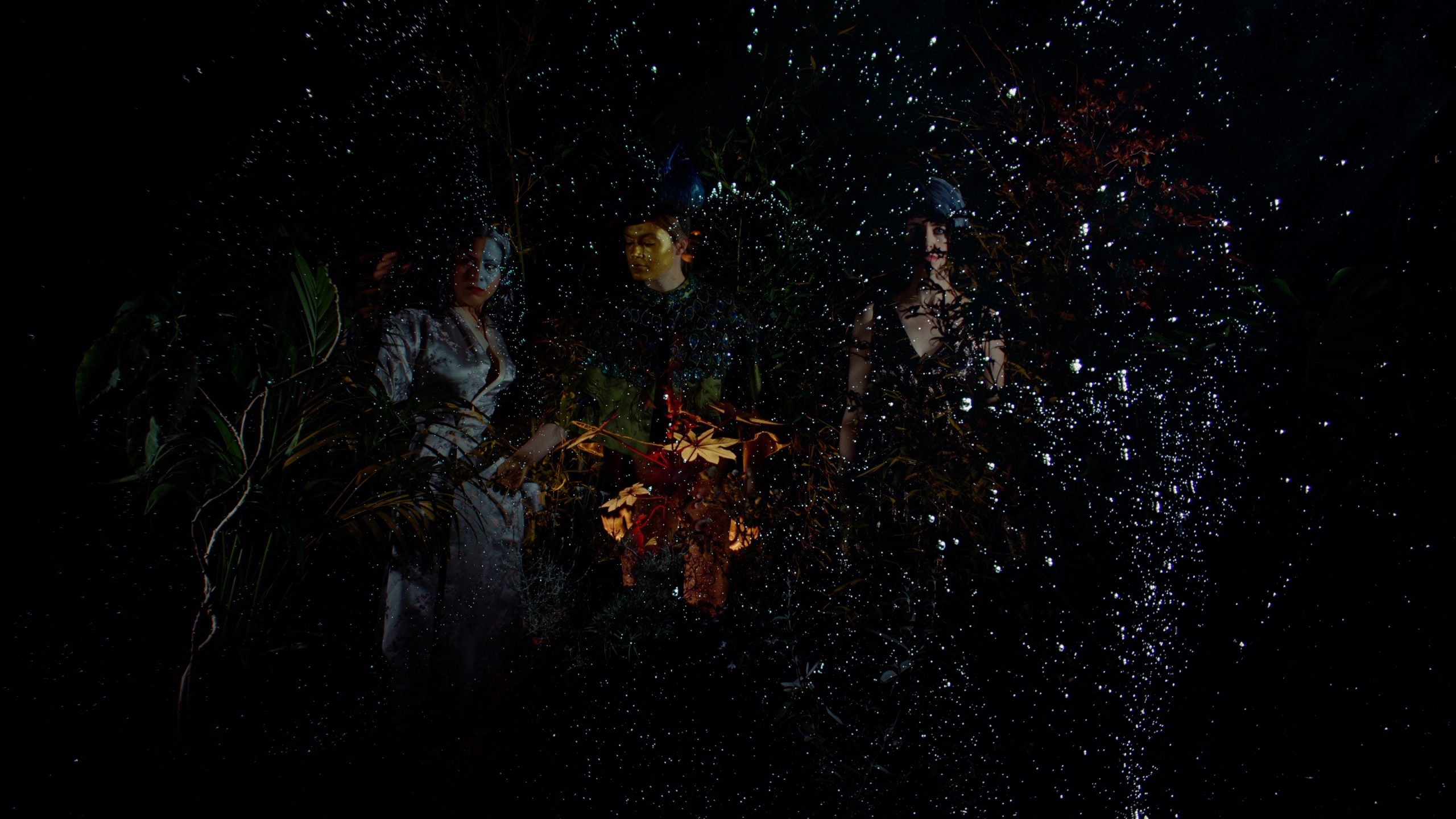 Rouzbeh Rashidi has amassed a prolific body of work since 2000 when he founded Experimental Film Society in Tehran. Based in Dublin since 2004 the Iranian-Irish filmmaker has produced 11 features and numerous shorts. With generous funding from The Arts Council of Ireland over the years Rashidi has developed a vision akin to a whirlwind of chaos, vibrant fusions of sounds and images. Cinephiliac tendencies are marked, everything from Cassavetes to science fiction, to the psychedelic, exuberant poetry. Perhaps when watching Phantom Islands we can think of Michelangelo Antonioni’s use of characters as figures of ambient feeling, a sense of presence and absence as the world of the film ruptures. We may also think of other figures on islands in cinema, Bibi Andersson driven to extreme hysteria in Persona or Ingrid Bergman longing for a way out in Stromboli.

Rashidi’s figures in Phantom Islands a man (Daniel Fawcett) and a woman (Clara Pais) are abstractions of emotion on the verge of disintegration. The pale blue of the sky, the scenic edges of the cliffs signify the end of things. This is Ireland’s west coast, often the most popular with tourists; it is given a new lease of life by Rashidi whose feelings for a wilderness of intrigue and despair are catastrophic and pulsating. He is poignant towards ideas of time and togetherness. We may think again of Jacques Doillon’s characters in Love Battles where a man and a woman physically fight throughout the film and tease out the idea of togetherness. Doillon’s characters are intimate towards each other whereas Fawcett and Pais somehow extend the intimacy to us as viewers partly through the ever ringing void of muted language, the wide landscape amid a small scope of narrative.

Intimacy is key to its core, all bets are off, the equilibrium of desire sends a thunderbolt to the viewer whose first viewing whilst at first tranquil becomes startling. Perhaps lucid dreaming is a good way to describe the viewing experience, horrifying futures for the figures, viewed like film reels jumbled out of order again and again. In Dean Kavanagh’s films the use of water is quite reflective for Rashidi here the water anticipates trauma. Withering gestures, the angst of memory, the fading of land not promised but perhaps evergreen. The sound design is riveting; wind, percussion, a tapping of the unconscious mind. Blurry imagery by the sea recalls Godard’s In Praise of Love, majestic visual ambience. The figures’ licking of tongues, civilisation washed to the shore. Humanity fell to earth not so long ago.

Trailers’ opening title reads ‘a spectacular attraction by Rouzbeh Rashidi, Pictures of a far-off world.’ Within this far-off world faces, bodies, ultimate expressions of the dark side of human nature. If we associate the chiming sound in the opening sequence in the woods with death, and the gentle strings which solemnly play as a figure (Anja Mahler) stands in front of a backdrop of wildlife with life itself, we’ve scratched the surface. The film fuses such tensions to extremes, three hours without dialogue is enough for a fugue state which Kent Jones has talked about. Rashidi cites Godard and Bergman amongst his favourite filmmakers. Whilst both have quite different sensibilities one can see Rashidi’s admiration for them through the colour schemes and flickering imagery (Godard) and close-ups of faces (Bergman). Rashidi notes in a statement about Phantom Islands “As an experimental filmmaker, I’m naturally drawn towards the overlaps between documentary and experimental cinema.” Here it is, all of those idiosyncrasies of humanity in the quiet moments ruptured by those moments of depravity, chaos.

With the vibrant opening of Luminous Void: Docudrama one recalls the opening of Peter Greenaway’s A Zed and Two Noughts and Drowning by Numbers. Michael Nyman’s horns meet Bernard Herrmann’s strings from Hitchcock’s Vertigo, any sense of reality slowly slipping away. Between Rashidi’s films we find naked bodies (mostly female), eyes looking through cameras, visual optics galore ready to disintegrate at any time. Void adds another dimension, echoing voices which philosophise about the worlds end. Rashidi enters the frame, not for the first or last time, his sturdy physique and calm nature, a sensitivity to form. Various figures sit in a car with back projection, movement, stillness in time, seemingly no beginning or end. A passenger exclaims “Stone, to fire and finally electricity.” Cross fades in Classic Hollywood unleash the beauty of transcendence from one image to the next, in Void’s case the image flickers like a Moviola locked in one space.

The opening of Void is Rashidi’s strongest sequence; it is distinguished for its mounting of tensions, explorations and sensations of image and sound. Three women, abstractions of the conscious mind taunt us through a speechless void, accumulated desire and aggressive impulses. They are the witches of the damned, the angels of tomorrow’s dream. Laughter exhales, are they that different from anyone else? Time is fractured, emblems missing, dream, awake, dream. There are disintegrating images, still vibrant, forever embedded. Space time, plants, (Silent Running meets The Wizard of Oz). A figure at a piano, each psalm today is tomorrow’s rupture. Chaotic vibrant colours, no escape. Bodies, faces, fade within a cross-fade, water is Void’s end and Phantom Islands beginning, there is no end to the possibilities. The life of the film flashes before us, it is the death of an object across 70 minutes, at once riveting, finally startling images and sounds, the void shatters.