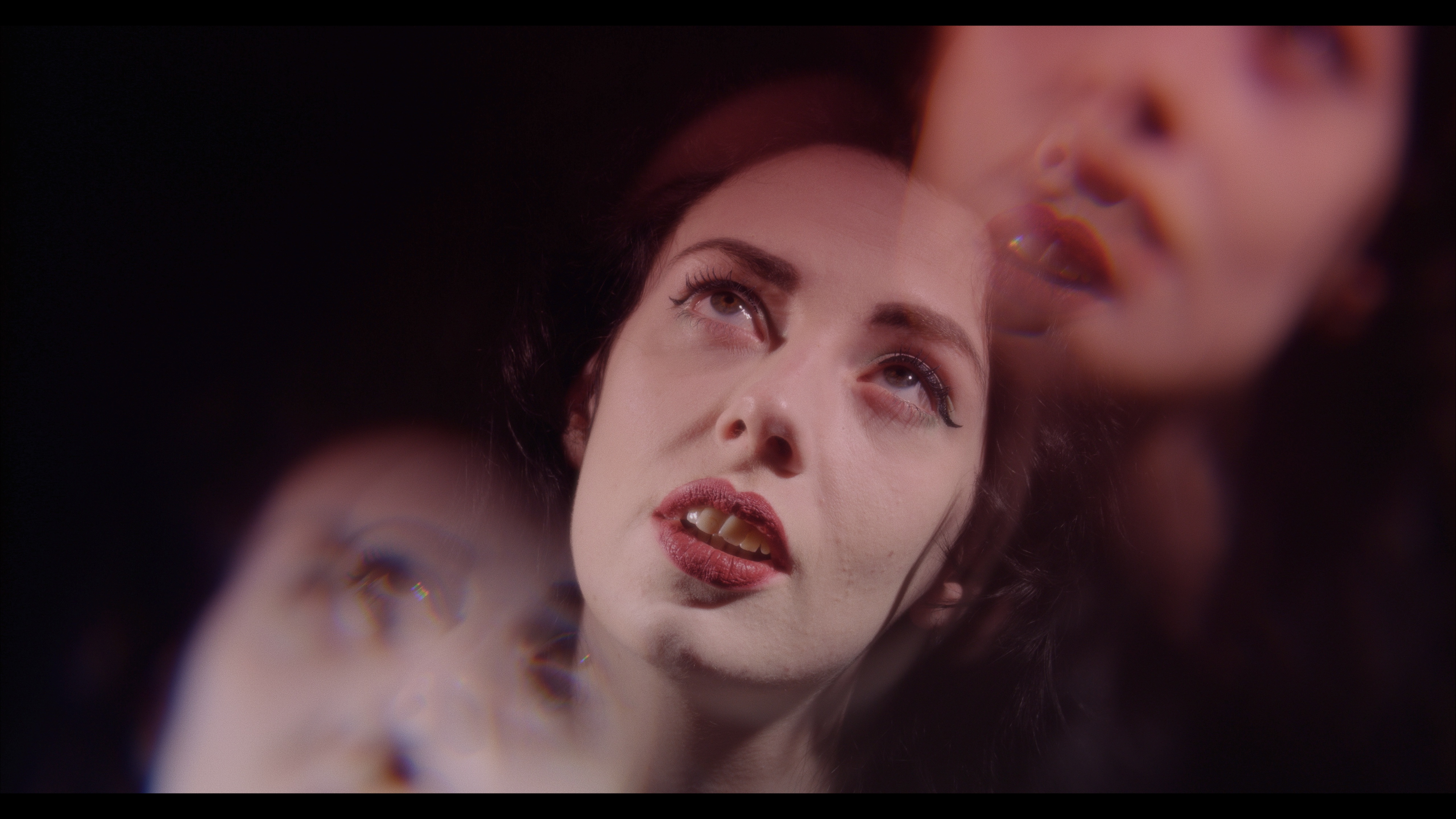 In theorising off-screen space, it’s easy to overlook the fact that, even when the camera is “in” the scene, it’s almost always back from the shot: the edge of the frame is varying distances from the camera, with an “apron” of hidden space between camera and picture.

Many have spoken of the unconscious of film; Rouzbeh Rashidi’s previous work has, in fact, plunged me into it many times. But from Luminous Void: Docudrama (2019), I get a different sensation. It’s more like the preconscious of film: all those thoughts, impressions and sensations that are not buried deep or hidden away (the unconscious as the negation, the other side of consciousness), but rather present somewhere in my mind yet just out of reach, jostling around all together, like an amorphous cloud slowly dripping and filtering into my consciousness. Thoughts that are not wholly alien or foreign, but certainly weird, difficult to assemble.

It’s the kind of process that Wilfred Bion talked about: thinking is the process that we need to deal with thoughts. And those thoughts come at us and into us, raw but fully formed, through the sensorium, like brute experiences or images or sounds which we have to break down and decompose in order to handle them (if, indeed, we can handle them).

Those thoughts are the luminous void. The docudrama part is the thinking-through process.

Am I standing up too close or back too far?

There is an apron of hidden space between camera and picture. An apron, a curtain, a fringe. A preconscious zone, just near the frame and emanating from the camera, but invisible. A concrete but unmappable space, surging forth only when it is used, filled, animated – fleetingly, once in a while. Luminous Void: Docudrama takes us there. Sometimes a shoulder, a mass, a silhouette, a figure intrudes, looming up in this preconscious space, both phantasmatic and real. Sometimes it is Rashidi himself, the imposing guy with an impressive moustache – the filmmaker as Magus, intervening between the scene and the lens, advancing and retreating from the image.

We start inside a film that doesn’t itself quite start. Things are set up (lights, props …); places (buildings, corners) appear before us, replete with fictional possibilities. Clapperboard. It could be the fragments of some tough British crime drama from another era – the 1960s, say. But there’s no visible crime and no violence; just the faces, the sharp, wicked laughter, the whispering and muttering and cursing, the coming and going of shady bodies.

Some viewers will recognise members of the Experimental Film Society (the project has been conceived by Rashidi with Jann Clavadetscher, Michael Higgins, Vicky Langan, Maximilian Le Cain and Atoosa Pour Hosseini); they have been transmogrified, one and all, into mean brutes or death-driven, Lynchian femmes fatales, and their business intends to be cryptic.

They are a Fringe Society, on the margins of decency and good sense. Orchestral music washes in, seemingly from another, older film (the score is credited to Cinema Cyanide). Booming echo, like your preconscious never quite making the leap into your conscious, falling back and trying again, over and over. The old-fashioned kind of echo-sound made by analogue tape-delay, that you sometimes inadvertently hear on mangled old VHS copies of B movies.

Things happen inside a car that is a pure cinema-car: in other words, fake, a prop, rocked from side to side, lit up or swathed in shadow, backed by fabulous projections. We are allowed to be reminded of similar cinema-cars in the workshop-films of that other RR (Raúl Ruiz), The Golden Boat or The Wandering Soap Opera. Menacing lines are uttered that follow only the logic of the non sequitur; while the sub-psychological interactions scream noli me tangere.

15 minutes in, the mood begins to mutate. The bodies start to lose their cool veneer and to disturb us. There are masks and nudes; there are radiophonic voices, snippets of noir narration. A touch of evil. Images stutter and superimpose as they pop our eyes with glorious primal colours: a reminder of Kenneth Anger’s Inauguration of the Pleasure Dome, forever in our dreams.

From the camera as object to the film-strip as phantasmagoria: flares, short ends, a projector beam. The flow from preconscious to conscious has slipped a gear and passed into something murkier. The railings of genre are peeling away. We are sliding from one fleetingly constituted world into others.

There is always the memory of sci-fi, horror and space opera in the head of this RR. From green slime and black cats to green fog and black holes. Those movies have sat in his pre-memory banks for so long that they’ve melted, disintegrated, merged into a sticky puddle all together. He tries to call them up consciously into his mise en scène, to channel them into the bodies of his actor-pals. But then everything warps and gets distorted. It’s a tender and grotesque operation, all at once.

We have slowly entered the realm of the mythic – but a broken, indecipherable myth. As often in Rashidi, there is a secret ceremony going on, and we are only half-invited to decode it. Strange gods and goddesses, peacock feather plumage, garish costumes. Gold paint on fabric, and on skin. Three women. Animal and human, a centaur-like configuration. Totems. An organ, with flowers on top, is being played. There are crippled hands, and tears shed. The spectator is a pinball pinging between The Wizard of Oz and Carmelo Bene, between Wild at Heart and pink erotica.

Things become increasingly perturbed, convulsing. The architectonic plates of this cinema-universe are shifting and groaning. “It is the night of the demon”. There’s a grimacing figure with a death-stare. But the other side of extravagant giallo-style death-by-murder is simply sleep, dozing, passing out, unconsciousness in all its states: so many figures here filmed inside their own dozy reverie. The cinema passes from the inside of one being’s eyelids to another’s. “The demon took him, not me”. No one will be dead forever here. It’s a mercy.

Sometimes, the sound is more present, more penetrating than the image. A bell chiming, an old phone ringing. They’re calling us, trying to pull us out of the accursed preconscious loop. But the bell-ringer and the call-placer are anonymous, lost functionaries from a Tower of Reason, far away. It is not the Magus calling. He has more yet in reserve, in store for us.

Bernardo Bertolucci recalled that, in 1968, editing was a kind of primal putting-to-death: it “tended to block and freeze material that was vital and came to us ‘red hot’ from the laboratories”. Jacques Rivette, likewise, recalled the ritual ecstasy of watching nine hours of Jean Rouch’s rushes, before anything was discarded, shaped, condensed and streamlined. Every filmmaker has been tempted to just screen their rushes (and never cut the film), even Jean Renoir, Rivette said. For them all, at a certain moment, editing was a necessary evil; BB even called it, melodramatically, “the moment of castration” – “editing became a byword for a reformist movement which attempted to contain the revolutionary one we lived in the streets where we shot”.

In those bygone accounts, “raw” footage is the film-unconscious, brutally censored and betrayed by the secondary revisions of rationality on the editing/dissection table (“for me”, said BB, “the editing room was a cross between a slaughterhouse and an autopsy room”). Our RR takes another path: he pulls the rushes into the preconscious zone of digital editing-memory, and then proceeds to layer and metamorphose them. In varying, recursive combinations, while sliding from plateau to plateau.

Over 50 minutes have passed. There is a woman on a bed, with a stereopticon. Or in a bath. Media archaeology and flesh archaeology. Nudity of all the senses, and in all the senses. We hear bombs dropping (another vain call to consciousness); bits of radio and phone dialogue. A playful swallowing of pearls; this is the empire of fetishism. Cinema is fetishistic (in the largest and most applicable way) or it is nothing. We are lost in the mists of clotted desire; the voluptuousness of death seduces and clocks us.

How can a movie like this ever end? Like the writing of Theodor Adorno, Rashidi usually proceeds by parataxis: one step forward, two steps back, rephrasing what came before but slightly differently, adding one more touch, and hence inching forward, painstakingly … And not only in montage (Adorno’s key topic in his Aesthetic Theory) but in the re-sifting of the banked-up image and sound layers … At the start of his book on Malick’s The Thin Red Line (BFI, 2004) Michel Chion defined parataxis, for his purposes, in another way: “the juxtaposition of different elements, without the use of terms to create a temporal, causal or logical relationship between them”. Suspending the levels, wedging-in the interstices, but keeping everything simmering, and in play. Luminous Void: Docudrama does this, too.

But it does wind itself up, ingeniously, for an ending. Stick around. The colour manipulation becomes wilder. The orchestra returns. Finally the Magus himself calls out: “1 – 2 – 3 – Action!” The film itself will perform for him, then: it will flip-pad back, in rapid review of the entire work. Back to where it all began, if you can sufficiently recall that enigmatic point of origin.

Retrace your steps. Synaptic processes are all about marking out the steps, tracing the paths, forging the links. Repairing the bridges, sometimes. That’s how thinking deals with those thoughts bombarding us from the preconscious and the unconscious alike. And from the prodigious cinema of Rouzbeh Rashidi and his fine feathered friends.