An Interview with The Underground Film Studio 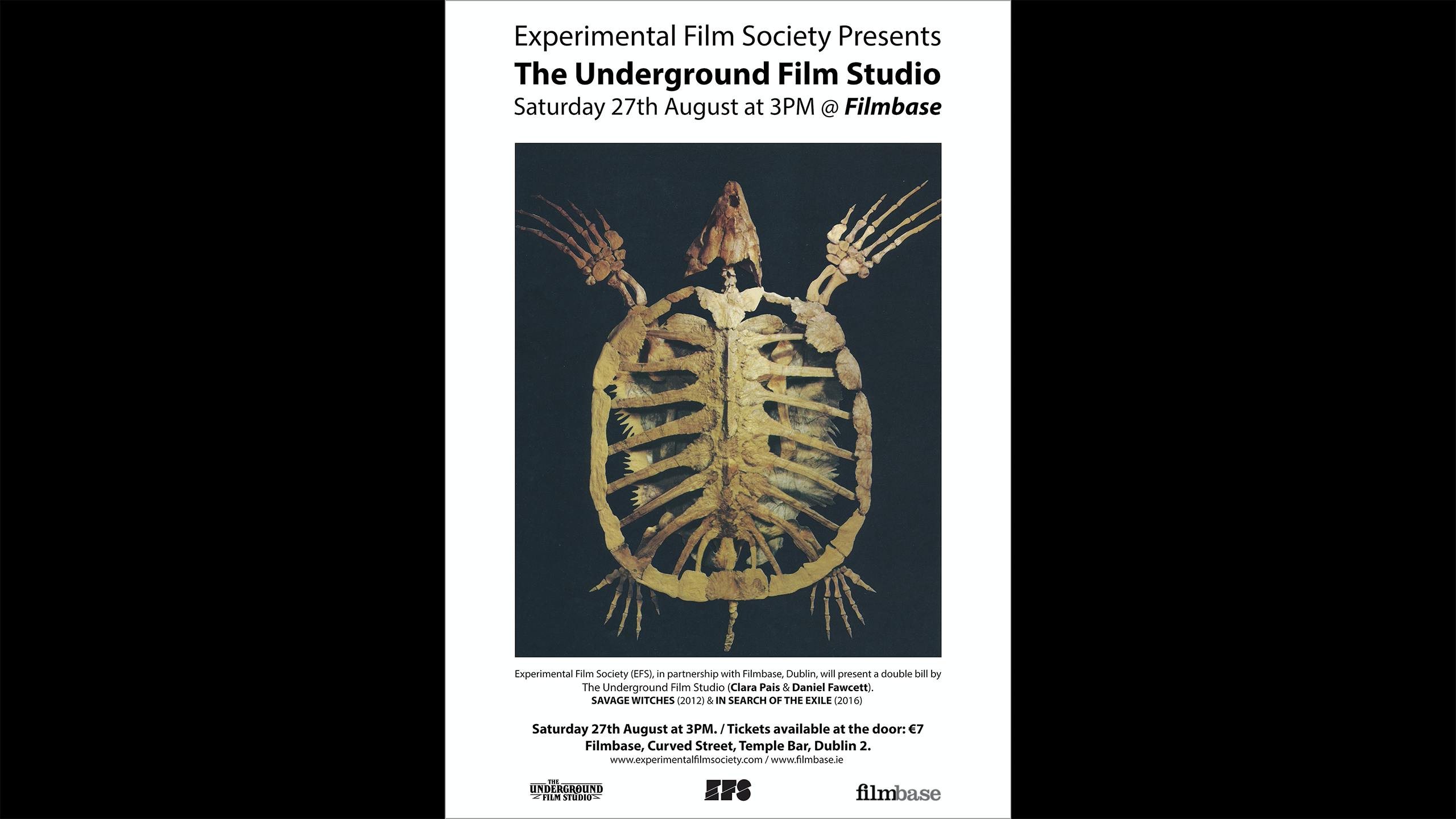 Clara Pais and Daniel Fawcett have been working as collaborating artist filmmakers since 2011, under the banner of The Underground Film Studio. Over the years they have created a small but meaningful filmmaking practice that includes feature, medium-length, and short films as well as live performances. Their shamanic approach to Cinema, combined with a very deep engagement with movie history, makes viewing their films what could be described as an ‘alchemical experience’. The Experimental Film Society (EFS), in partnership with Filmbase, Dublin, will present a double bill by The Underground Film Studio, on Saturday 27th August at 3PM at Filmbase, Dublin. For this occasion EFS Publications interviewed Clara and Daniel about their films and concerns:

​Can you tell us about the genesis of The Underground Film Studio? How did you decide to partner up for creating works?

It all started with our film Savage Witches which we began making only a few weeks after we first met. Initially we had planned to make it as a very small project over a couple weeks but it quickly grew beyond any expectations and ended up being the most intense project either of us had ever worked on. We spent every day, 7 days a week working on it for 18 months.

The idea of establishing The Underground Film Studio came about during this time. We wanted to create a banner for all our projects that could encompass more than just films and could allow us to experiment with cinema in a wider and more complex way. The name gives away our two main desires, that of creating works of underground or personal and non-industrial cinema and also to create films with an attention to artistry and craft in both the sense of the artisan’s studio and the old Hollywood studios.

‘Savage Witches’ (2012) seems like a breakthrough, and the initiation of your duo practice. It was also deeply influenced by Věra Chytilová and Alejandro Jodorowsky. How was this film received by the international community, and do you think it opened up new opportunities for you?

Savage Witches grew out of a shared passion for cinema, and a particular love for the films of Chytilová, Jodorowsky, Jarman, Jeff Keen, Powell & Pressburger, Godard, the Kuchar brothers, Ken Russell and so many more. We also found that we shared an equal love of both underground, experimental films and golden age Hollywood and we both had a desire to somehow make films that existed in a tradition of both these worlds. We talked about the kind of films we wanted to make and all those ideas came together over a weeklong non-stop creative outpouring in the script for Savage Witches.

On the one hand Savage Witches is an ode to cinema, a celebration of the magic of moving images, and on the other it is a deep personal questioning of what it means to be creatively free and the complex and maybe impossible task of coherently expressing oneself. The making of this film helped us clarify what our goals and main points of interest are, with it we position ourselves in relation to cinema and art and creativity, it is a kind of mission statement in a way and as such it can be an interesting entry point into all of our work.

In terms of screenings it has done pretty well, it found its home in some of the underground film festivals in Europe and the USA and in some of the small independent film clubs. We were quite amazed at how positive the response was, we set out to make the kind of film that we wanted to see with the hope that there might be a few others out there that would get something from it too. In some ways we had hoped that there would be more interest from some of the bigger festivals though, the kind of festival that historically would’ve been interested in this kind of work, the feature-length experimental narrative cinema. We discovered that the situation is different now from what we expected, it was an interesting learning curve about the current film world, we seem to be living in a much more conservative and commercially minded time than we realised. So even though anyone can make a film now, unless that film is middle of the road in terms of style and narrative, or has some clear and digestible political agenda, then you’ll probably find it a herculean task to get it shown.

Can you tell us a little about ‘In Search of the Exile’ (2016) and explain how it was conceived? Technically you seem to have mixed analogue and digital video to create a unique texture. Can you tell us about that too?

In Search Of The Exile came about when three separate conditions came together: 1) we had been talking about making an abstracted painterly film, using some of the processes that we’d been developing over the last couple of years but somehow taking it further; 2) we had a series of poems, stories and ideas for a film called The Exile’s Return Home, which we were wanting to do something with; 3) there were several sequences which were shot for our films The Kingdom Of Shadows and The Quest For The Cine-Rebis that did not make the final cuts but which were very exciting.

These elements all came together and somehow became the beginning of In Search Of The Exile. The film was created entirely over a two month period, where we shot new sequences and processed them and then created all the sound and music. The visual textures were created through a somewhat complicated process of transferring footage back and forth between HD, DV and VHS until arriving at images that felt right. It was really the images that led us in the creation of this film.

I am particularly interested in your video essay ‘The Quest for the Cine-Rebis’ and the way you presented your ideas. There is so much in common between EFS and what you guys have explored in this work, which might also function as a manifesto. What inspired you to make this statement and where did it come from?

Since we met we’d been gathering ideas and planning to write an essay or short book about cinema that would question the structure of the existing film culture and put forth some ideas on how to think differently about the medium and the processes of film production.

We felt that it was important to raise questions and challenge the assumptions that are taken for granted about what cinema is and what it can be that we are usually presented through ‘official’ histories and academic theory. And most importantly we wanted to say all this in a creative non-academic way, through meditations, reflections and poetry. All these ideas were scribbled on bits of paper and put onto an ever growing pile of notes on our desk that seemed to be getting bigger and more daunting by the day.

While we were crowdfunding for The Kingdom Of Shadows and Black Sun we were making short videos for all our sponsors and in these videos we quoted lines from our notes. We made nearly thirty of these over about two weeks and at the end of it realised that the things we were trying to express were better said in the language of moving images than in the form of a written essay. It all suddenly clicked and we realised how we could organise our thoughts around these various topics and ideas into some kind of a whole that could be accessible to other people. We still wrote an essay of sorts but it’s more fragmented, it contains a script for the film and a series of reflections strung together around the idea of seeking for a more personal and idiosyncratic multifaceted art cinema. It is difficult to set into words the possibilities of the creative process because it keeps reaching beyond itself and resetting its own limits and you can’t keep up with yourself, a language that can truly express it has to be somehow open-ended and paradoxical in order to capture that dynamic energy.

You wrote a very enlightening blog called ‘Some Thoughts on Film Submissions and Experimental/Artists Film Programming’, which is about distributing experimental feature films in this day and age. I think this is a massive issue and challenge for any underground filmmaker who works with the feature-length format. Can you please tell us about your concerns and thoughts on this matter?

These thoughts have come from our own experiences of making films and trying to get them shown but also from programming film events and festivals, so we really can see the problems in both sides. That blog post was written specifically in response to an observation that most current film festivals and programmes that are calling out for experimental works are also setting restrictions on duration and theme to an extent that really pushes a lot of very interesting work out of circulation and creates a kind of censorship, even if it may be unconsciously or unknowingly, of what is really being made at the moment.

It’s important to discuss these things and to call people out on their censorship but we don’t like to wait around for things to solve themselves, we try as best we can and within our means to take charge of the situation and whenever possible put on our own screenings and find alternatives like joining forces with other filmmakers and create an exchange network where we show each others work or recommend other people’s films. It’s important to become a champion for those whose work excites you especially if no one else seems to be talking about it or showing it.

Our publication and Facebook page FILM PANIC is also a way of addressing some of these issues, it is a way of sharing the work that we find exciting and in some way help re-tell the history of creativity in cinema as we see it. There is so much in cinema which has not been given proper attention, so much incredible work that has fallen through the cracks of history.

What are your future plans for The Underground Film Studio?

​We are currently in post production of two new films Black Sun and The Kingdom of Shadows, both will be finished in late October with the premieres taking place in the UK and Portugal before the end of the year.

We also have a new issue of FILM PANIC magazine in the pipeline and are developing some more expanded cinema performances which we hope to present soon, and of course more films to make in 2017.