The Metamorphic Portrait of Jann Clavadetscher 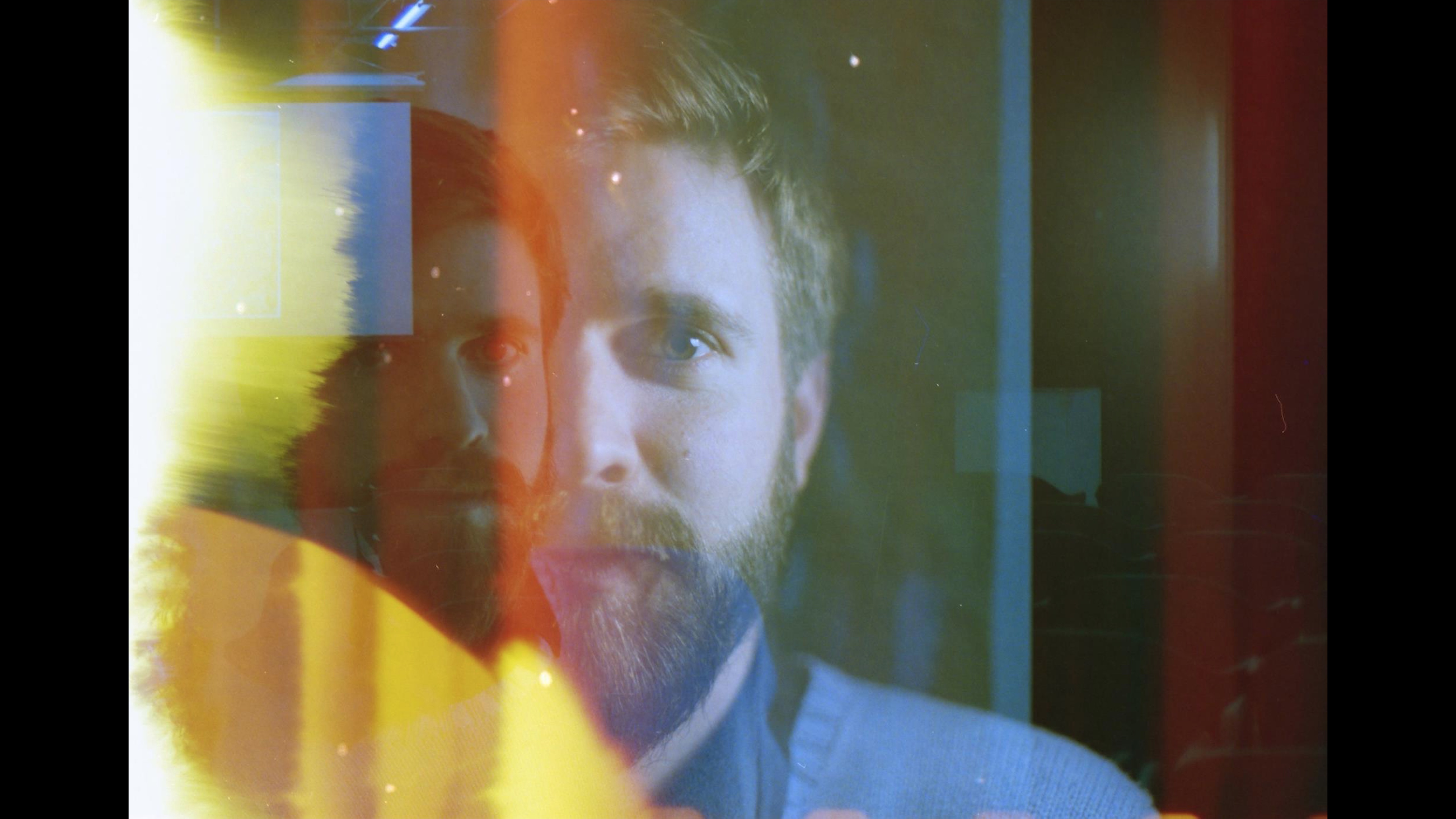 After recently watching the masterful conclusion of Jean Cocteau’s Orphic Trilogy, Testament of Orpheus (originally Le testament d’Orphée, 1960), I realized that the great majority of films born in the maternity hospital of Experimental Film Society (hereafter, EFS) are the said meta-fantasy’s spiritual children, wayward and mischievous, existing in the ashes and flames from which Cègeste’s photograph is resurrected, between the lines of the minimalist chalk illustrations and in the smoke released from the bubble that meets the knife’s tip.

The same applies to the oeuvre of EFS’s Swiss-born, Dublin-based filmmaker Jann Clavadetscher who has created more than twenty short films and one (extraordinary!) feature since 2005, in addition to the installation and performance practice. A versatile, deadpan-loving jester, mad scientist/wizard, documentarian and whatnot of the kingdom ruled by Rouzbeh Rashidi, he works with a wide variety of formats including CCTV cameras, and employs various ‘tricks’ in painting or rather, constantly reinventing his own portrait.

In an oxymoronic twist, Clavadetscher’s debut is named after a departure greeting. Starkly shot in high-contrast black and white, So Long (2005) follows a young man (played by the pre-moustache Rouzbeh Rashidi) in his going out ritual and the actual act of going out (un)concluded with a sort of a meditation on an unspecified city’s (presumably Dublin’s) nightlife. The mundanity thereof is color-drained into an austerely poetic anti-drama which betrays some of the author’s ‘fetishes’, such as framing within frame (usually through doors) and close-ups that tend to disrupt or ‘abstract-ize’ reality. Besides, the devil is in the detail, they say.

Identical in aesthetics, apart from the (symbolic) intrusions of saturated colors, is Goldfish (2006) that is almost certainly set in the same universe as So Long. The protagonist is another young man (Simon Rokyta) who is tasked with taking care of a pair of goldfish that belonged to his deceased friend or relative. His daily routines are depicted from a safe distance, yet there is something highly personal about them. Tinged with cold, somewhat Wenders-esque melancholy, the monochromatic imagery subtly captures his mental state, grieving and obsessive clinging to memories (embodied by fish) in a mostly silent, dialogue-free atmosphere.

Both So Long and Goldfish, as well as the following offerings, The Glimpse (2006) and Forget You Now (2007) are framed in boxy ratio as if the author wanted to transpose his characters to the past; to emphasize the ‘old-schoolness’. The Glimpse let us have a brief look into the Dubliners’ life and it does so by piecing together two seemingly unrelated acts in which the ‘hero’ is the city itself. The lovers under the bridge of its Episode One: Day Time and the photographer of Episode Two: Night Time are just random human subjects caught in their ephemerality.

Forget You Now portends the emergence of Clavadetscher’s ‘mysterious alter ego’ who is ‘an explorer, a combination of location scout and cinema usher inspired by the iconic figures of silent film comedy’. Humorously portrayed by Simon Rokyta, this figure (clumsily) flirts with a lovely red-haired girl (Danica Dodd) on a train, and idly strolls an urban landscape, all in grainy Super 8 glory accompanied by muffled buzzing (a noticeable departure from the former use of diegetic sounds and/or non-diegetic music). The sequences of his tourist-like wandering are open to many interpretations, ‘within the context of an idea of cinema’ or within the context of what appears as a sketch for a twisted rom-com.

Padded Sleeve (2007), Seaside (2007) and, to a certain degree, Remembering (2008) can be labeled as ‘lyrical documentaries’ depicting, respectively, the making of a bird house (reminiscent of David Lynch’s DIY lamp project from DVD Dynamic 01: The Best of DavidLynch.com), intergenerational bonding between a boy and an old man, and non-sequitur snippets of a (personal?) journey recalled via light, shadows, textures and reflections, with the human factor being of secondary importance as in The Glimpse.

The Man With Moustache & Hat (2008) acts as an absurd, Dada-ish homage to / deconstruction of detective flicks (and as a spiritual prequel to Rashidi’s 2014 collaboration with James Devereaux, Mutual Admiration Society), marking the birth of Clavadetscher’s alter ego who roams an empty house probably searching for the clues of cinematic nature. For some more whimsical door-opening and shadow-chasing action, he returns in a wry & wordless deadpan skit, Visitor (2013), and makes numerous cameos and comebacks in subsequent offerings, frequently pretending to be the ‘real ego’.

A sole 2009 film, Kino, feels like a love song to the art of film-screening, and as a great companion piece to Lynch’s 2013 short video documentary Idem Paris. Drenched in the clattering sounds of a 35mm projector (which belongs to a huge multiplex where the shooting took place), this ‘pseudo-mystery’ (for lack of a better term) grows increasingly enigmatic, with its ‘protagonist’ (Robert Hanly) gradually disappearing in hypnotic close-ups and later, in the machinery’s hazy B&W dream. It is a fitting metaphor for what our experience of a film should be like. And in case it gets you addicted to the clatter, Loop Frame (2013) will provide you with a new (sepia-toned) fix, while pushing you into the existential void of a single found footage frame.

Speaking of found footage, I’ll give myself freedom to further mess-up the chronology in order to mention Universal Film (2018). Entirely composed of the material unearthed from an archive, this particular miniature represents the cumulative result of Clavadetscher’s bold experiments in the 2010s that can effortlessly render you disoriented or, in the worst case scenario, lost. By virtue of immersive audio-visual potpourri, it takes you on a ride across the fields of multiple genres, from western to B-horror to science-fiction, in a matter of minutes!

On the other hand, its predecessors combined take you to different corners of the world (mostly Europe), from Ukraine (ЧОП, 2011) to Italy (Canvas Eye, 2014) to Switzerland (Sumpf, 2015) and back to Ireland (House Seats, 2016), and send you on a hunt for possible cinematic references. ЧОП can be considered a well-intentioned parody of dramas by Šarūnas Bartas, whereas Canvas Eye is one hell of a medley that prefers watching the viewer rather than being watched. Kish (2014) invites us to join the lonely artist (Rouzbeh Rashidi who’s not only Clavadetscher’s frequent collaborator, but doubtlessly one of his biggest influences as well) on a ghost ship tour, and [Lift] (2015) elevates us into a trance-like state through its baffling, psychedelic superimpositions, not ever losing sight of the aforementioned ‘context of an idea of cinema’.

½ (2015) puts the pleasantness of symmetry to the test, marrying self-reflexivity to the poetry of the mundane in a sixty-seconds-long cine-haiku set to the noise of the (yellow) cable car wheel. Equally haiku-esque in content, though formally very different are (brooding) Teaser (2015) (to Rashidi’s Trailers?) and (intuitive) Impulsive Film (2016) that celebrates the darkness of movie theatres… or some such. Controle No. 6 stands apart as the most original of the 2015 bunch, considering that it’s composed of CCTV footage tautly edited into a dystopian sci-fi informed by quantum paradoxes. In this respect, Clavadetcher’s opus may be viewed as a peculiar multiverse in which the parallel universes are separated from each other by quirks of their creator’s alter ego. Sumpf (2015) sees him trapped in a mountaineer’s nightmare that gives a new meaning to ‘green screen’, Corridors (2016) incarcerates him in a mad scientist’s VHS hell replete with doors and misleading passages, and House Seats (2016) has him frozen at the entrance into the variant of the Black Lodge, under the watchful eye of Rashidi’s camera… or is it the other way round?

The b(right)est for the last, Kino Hospital evokes the memories of the late70s/early 80s low-budget sci-fi, simultaneously ironizing EFS filmmakers who fill the roles of the titular institution’s scientists and their opuses into a quaint, meta-fictitious, close-to-revelatory puzzle. Directed ‘under the spell of Dr. Baron Von Mertzbach’ (Rashidi), the film takes place all around the globe, in the aftermath of an unspecified failed experiment, and goes as far as to involve the underinformed audience as the frustrated, yet intrigued conspirators of the plot. But, the audience should not allow themselves to be discouraged by its impenetrability – on the contrary, they should embrace it and go with the dual flow of oft-colliding visual and aural narratives, the former of which is particularly astounding. Via re-filming both found and original footage (predominantly of VHS quality), Clavadetscher delivers some delightfully trippy imagery of RGB glitches and acidic colors comparable to those of a 2016 phantasmagoria, In Search of the Exile, by Daniel Fawcett and Clara Pais. Electrifying!